For two and a half minutes the Indian radio DJ described in graphic detail what she said was the torture and killing of a father and son in police custody. The video shared to Instagram sparked an extraordinary groundswell of outrage at the deaths with politicians marching in the streets, Bollywood stars voicing condemnation and television stations holding debates on police brutality.
Listen now to WTOP News WTOP.com | Alexa | Google Home | WTOP App | 103.5 FM
(1/6) 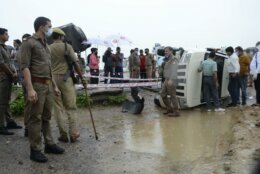 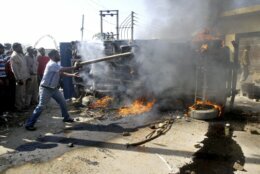 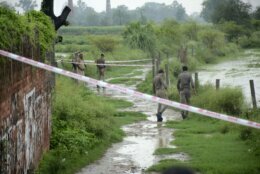 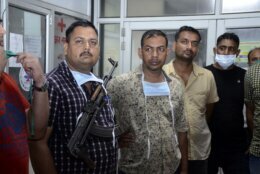 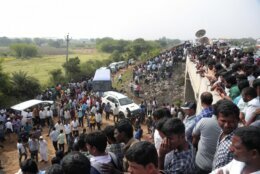 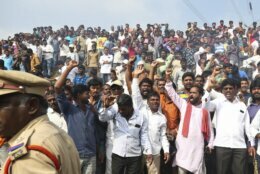 NEW DELHI (AP) — For two and a half minutes the popular Indian radio DJ described in graphic detail what she said was the torture and killing of a father and son in police custody.

The father was arrested for flouting coronavirus lockdown rules by keeping his mobile phone shop in southern India open past curfew, Suchitra Ramadurai alleged in a video posted to her Instagram. The man’s son went to check on him at the police station and both were beaten so badly they were still bleeding when they appeared before a judge the next day.

Three days later, on June 23, they were both dead.

The video, which was viewed 20 million times before police ordered Ramadurai to take it down, sparked an extraordinary groundswell of public outrage at the deaths with local opposition politicians marching in the streets, Bollywood stars voicing their condemnations and television stations holding hourslong debates on police brutality.

Even more rare, 10 police officers were arrested in a federal investigation and charged with murder.

The case came as global attention was focused on police abuse following the death of George Floyd in custody in the United States. It has renewed calls in India for reform of what human rights advocates have described as a culture of abuse and impunity within the country’s police system.

The response to the deaths of the father and son, if not unprecedented, was far from the norm in India, where police “routinely use torture and flout arrest procedures with little or no accountability,” said Jayshree Bajoria, the author of “Bound by Brotherhood,” a 2016 report on custodial deaths in India.

“Often the entire system is complicit in shielding the police responsible for such abuses instead of ensuring accountability,” said Bajoria.

According to the New Delhi-based National Campaign Against Torture, 125 people died in police custody due to torture or other abuses in 2019.

In internal reports police typically attribute such deaths to other causes such as suicide, preexisting illnesses or natural causes. However, in many cases documented by rights groups and government-appointed investigators, the deaths were determined to be the result of torture.

The country’s National Human Rights Commission said in its 2017 annual report that violence in custody was so rampant “that it has become almost routine,” adding that many custodial deaths were reported after a considerable delay or not reported at all.

India’s Home Ministry, which is responsible for law and order, did not respond to requests for comment on the issue.

In India, suspected criminals are often killed in what police and military officials call “encounters,” such as one last month when a suspect wanted in connection with the deaths of eight police officers was fatally shot after police said he snatched a gun while trying to flee. Activists were quick to cast doubt on that account.

Yet unlike the deaths of the father and son, that case was met with little public anger.

Because the country’s clogged judicial system is slow to ensure prosecutions and punishments, such killings are often encouraged by politicians, celebrated in popular Bollywood films, overwhelmingly supported by the public and rewarded by state officials with out-of-turn promotions and gallantry prizes to the police involved.

Last December, on a visit to the crime scene, police shot dead four men suspected in the high-profile rape and killing of a young woman whose body had been set on fire. Hours after the shootings, about 2,000 people gathered at the site to celebrate, passing out sweets and showering police with flower petals.

The slow pace of the Indian judicial system means it often takes years, even decades, for cases to reach completion. A backlog of tens of millions of pending court cases have significantly eroded the public faith in the system.

“It is this declining faith in the system that has led many in India to demand and support instant justice,” said sociologist Kalpana Kannabiran.

Indian courts and multiple human rights commissions have set out detailed procedures to prevent and punish such killings, but prosecution is rare. Between 2001 and 2018, 26 police officers were convicted of custodial deaths.

“These cases expose long-term structural frailties and weakness that are allowed to remain within the system and repeatedly end in tragedies,” she said.

Despite repeated demands for police reform, activists say education and training for police about human rights issues and proper investigatory techniques is woefully lacking. They also say police implicated in abuses, regardless of rank, must be prosecuted.

Activists are also repeating their demands for India to ratify the United Nations Convention Against Torture and incorporate its provisions into the country’s domestic laws. India is among very few countries that have not ratified the convention.

“India can only boast of rule of law if those charged with enforcing it are held accountable,” Bajoria said.