Shares advanced in Asia on Tuesday, extending another rally that took the S&P 500 to within striking distance of its…
Listen now to WTOP News WTOP.com | Alexa | Google Home | WTOP App | 103.5 FM

Shares advanced in Asia on Tuesday, extending another rally that took the S&P 500 to within striking distance of its all-time high set in February.

Japan’s Nikkei 225 added 1.6% and Hong Kong gained more than 2% in early trading, even as the tally of confirmed new coronavirus cases worldwide topped 20 million, according to a tally by Johns Hopkins University.

The gains followed President Donald Trump’s announcement over the weekend of stopgap moves to aid the economy, after talks on Capitol Hill for a bigger rescue package faltered.

Sentiment got an extra boost from signals that the talks might resume, and by Trump’s suggestion to reporters that he is planning a capital gains tax cut and a tax reduction also for “middle income” earners.

Trump signed executive orders over the weekend to extend an expired benefit for unemployed workers, among other things. The orders were more limited than what investors hoped to see from a full rescue bill for the economy, but hopes remain that the White House and Congress will eventually reach a compromise.

Losses for technology stocks weighed on the market amid worries that worsening U.S.-China relations could mean retaliations against the U.S. tech industry.

The industry has mostly cruised through the pandemic, thanks to the need for tools for remote work and demand for online commerce and entertainment to weather business shutdowns and quarantine advisories. Critics had already been calling tech stocks overpriced, even after accounting for their huge and resilient profits.

Investors are looking to Washington for a fresh lifeline for the U.S. economy, which pancaked into recession as the pandemic gained ground in the spring.

On top of the rising number of coronavirus counts around the world, uncertainty has grown with widening antagonisms between the United States and China, the world’s largest economies. The latest move in their escalating tensions was China’s announcement of unspecified sanctions against 11 U.S. politicians and heads of organizations promoting democratic causes, including Senators Marco Rubio and Ted Cruz.

The two sides are scheduled to hold virtual trade talks at the end of the week.

“With the Fed buying credit and indirectly saving U.S. stocks, traders should not expect any major corrections even if the selling of tech stocks persists deeper into the trading week,” Edward Moya of Oanda said in a commentary. 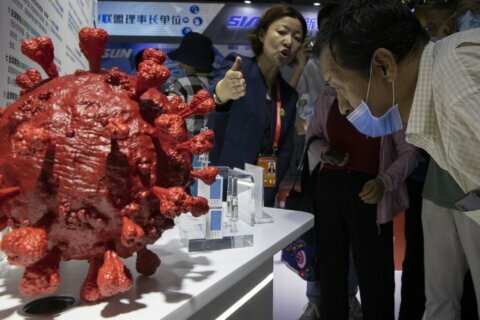