SRINAGAR, India (AP) — Three suspected rebels and a counterinsurgency officer were killed in a gunbattle on the outskirts of Indian-controlled Kashmir’s main city, police said Sunday.

An Indian soldier was also killed in Pakistani firing along their frontier in the disputed region, an army spokesperson said.

Police said the three militants Saturday night fired at a checkpoint in the outskirts of Srinagar in a failed bid to snatch a rifle from a paramilitary soldier.

Police and paramilitary soldiers later traced them hiding in a civilian home, the region’s police chief, Dilbagh Singh, told reporters. In the subsequent fighting, which lasted the whole night, a counterinsurgency officer and the three attackers were killed, he said.

Singh said that among the three slain militants, one was active for about a year. He didn’t give details about the other two.

In the last two days, seven suspected rebels and an Indian soldier were killed in two separate gunfights.

Since January, government forces have killed about 180 militants during counterinsurgency operations, according to the Jammu-Kashmir Coalition of Civil Society, a rights group. Based on official figures, data shows that over half of them had joined the rebels less than a year ago, and out of them most had been active for only a few months.

At least 68 government forces and 46 civilians have been killed since January, the rights group said.

Anand called the Pakistani firing a violation of the 2003 cease-fire accord between the two countries and said Indian soldiers retaliated. Pakistan did not immediately comment. In the past, each country has accused the other of initiating the firing and violating the cease-fire agreement.

India and Pakistan claim the divided territory of Kashmir in its entirety. Most Muslim Kashmiris support the rebel cause that the territory be united either under Pakistani rule or as an independent country. 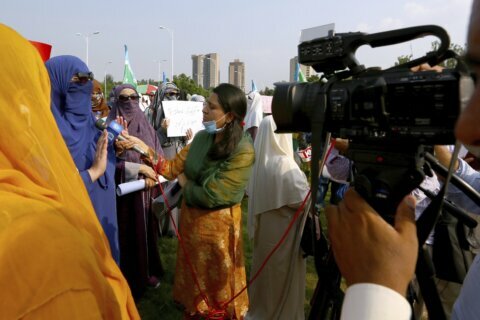