THANKSGIVING NEWS: Thanksgiving dinner for pets? | What to do with leftovers | 100 recipes | Grocery stores open on Thanksgiving | WTOP Weather
Home » Asia News » US envoy, after Seoul…

US envoy, after Seoul visit, reassures Japan of alliance

TOKYO (AP) — A U.S. envoy reassured top Japanese officials Friday of the importance of their alliance in dealing with regional security threats, just as the North Korean leader’s sister expressed low expectations of a summit between her brother and President Donald Trump this year.

U.S. Deputy Secretary of State Stephen Biegun is in Tokyo after his visit to Seoul where he discussed nuclear diplomacy with North Korea, which has refused to resume talks due to what it calls hostile American policies.

Biegun met with Japanese Foreign Minister Toshimitsu Motegi and Defense Minister Taro Kono separately and reaffirmed the importance of their alliance in maintaining and strengthening “the free and open Indo-Pacific” and dealing with regional concerns including North Korea and China.

Earlier Friday, Kim Yo Jong said her brother won’t be meeting Trump because there is no need for the North to gift Trump meetings when it’s not getting any reward in return. In her statement released through Pyongyang’s official Korean Central News Agency, she called for major concessions from washing ton to keep alive the nuclear diplomacy.

Kim Yo Jong is seen as her brother’s closest confidant and was recently confirmed as his top official for inter-Korean affairs.

South Korea on Thursday asked Biegun to try to revive the talks with the North. He stressed during his meetings in Seoul that resuming the diplomacy with the North was important. But he separately accused a senior North Korean nuclear negotiator who had blamed the deadlocked talks on American hostility of being “locked in an old way of thinking.” Those remarks indicated Washington won’t likely make concessions to resume the talks despite the North’s pressure.

Kim Yo Jong said “a surprise thing may still happen, depending upon the judgement and decision between the two top leaders” but that the U.S. needed summit talks while Pyongyang did not.

North Korea has demanded that the U.S. lift international sanctions and provide a security guarantee if it’s truly committed to talks about the status of its nuclear weapons program.

Some analysts believe North Korea, which is sensitive about potential changes in U.S. leadership, will avoid serious talks with the Americans for now before an eventual return to negotiations after the U.S. presidential election in November.

Kim Yo Jong said that the diplomacy could be salvaged only by a reciprocal exchange of “irreversible simultaneous major steps.”

The nuclear diplomacy has stalled since a second summit between Kim and President Donald Trump in early 2019.

AP journalists Kim Tong-hyung in Seoul and Emily Wang in Tokyo contributed to this report.

The Latest: Amid pandemic, WHO pushes more physical activity 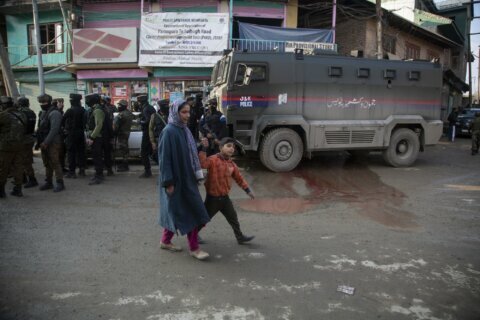