SEOUL, South Korea — South Korea will allow baseball fans to return to the stands beginning Sunday under a phased process planned by health authorities to bring back spectators in professional sports amid the COVID-19 epidemic.

Teams initially will be allowed to sell tickets for only 10% of the seats. Fans will be screened for fevers and required to sit apart and to wear masks. They will be banned from eating food and drinking beer, and discouraged from excessive shouting, singing and cheering.

South Korea’s baseball and soccer leagues returned to action in May without fans in the stands.

— New York City officials say the city has reached its goal of performing 50,000 coronavirus tests a day, and its contact tracing effort has potentially prevented thousands of new infections.

— Three out of four Americans favor requiring people to wear face coverings while outside their homes to help slow the spread of the coronavirus, according to a new poll from The Associated Press-NORC Center for Public Affairs Research.

— Southwest Airlines says it won’t allow health waivers to its face-mask rule. Only children under 2 will be exempt from the requirement to cover their mouth and nose during flights.

Premier Daniel Andrews said Friday that if someone who is a newly diagnosed coronavirus case does not answer after being telephoned twice, soldiers will accompany a health official to the infected person’s home for a contact-tracing interview on the doorstep.

Anyone who is not at home will likely be fined for failing to home quarantine while awaiting a negative test result. Previously, failure to contact an infected person by phone was not followed up with a house call.

BEIJING — Chinese officials have reported two confirmed coronavirus cases in a northeastern province as China continues to see infection clusters develop even though it has largely contained the virus in most of the country.

The Liaoning infections mark China’s latest cluster after one in the far northwestern region of Xinjiang earlier this month. That outbreak, focused on the regional capital of Urumqi, has infected dozens of people and officials have curbed travel and ordered widespread testing.

Elsewhere, China has largely contained the virus, with major cities such as Beijing and Shanghai opening up to increased economic activity and social interaction.

SEOUL, South Korea __ South Korea’s daily increase of confirmed coronavirus cases has again dropped below 50 amid a continuation of an uptick in virus infections in the densely populated Seoul area.

The Korea Centers for Disease Control and Prevention said Friday it has confirmed 41 additional virus cases over the previous 24-hour period. The new cases brought the national tally to 13,979 confirmed cases, with 298 deaths.

The agency says 28 of the newly reported cases were locally infected patients — 24 of them in the Seoul metropolitan area. It says the remaining 13 cases came from overseas.

South Korea has been reporting roughly 20 to 60 new cases every day since it eased rigid social distancing rules in early May. It reported 59 new cases on Thursday, 63 on Wednesday and 45 on Tuesday.

PHOENIX — Arizona’s governor says public schools won’t be required to reopen for in-person learning as expected in mid-August as the coronavirus pandemic continues at a high level.

Gov. Doug Ducey said Thursday that the state Health Services Department will develop a set of scientific guidelines that school districts and local public health officials can use to determine if it is safe to reopen classrooms.

The governor also says bars and gyms that he ordered to close a month ago won’t be allowed to reopen.

Arizona has topped 3,000 deaths from the coronavirus and has nearly 153,000 confirmed virus cases.

LOS ANGELES — California counties are stepping up enforcement of public health orders as hospitalizations and positive tests for the coronavirus skyrocket in many parts of the state.

In the San Francisco Bay area, officials in Marin and Napa counties have approved fines ranging from $25 to $500 for individuals violating public health orders, including failing to wear masks. Supervisors in nearby Sonoma County will consider a similar move.

The virus continues to surge in many parts of California, topping 425,600 confirmed cases. There were 157 deaths Thursday, the highest reported in a single day.

The action taken Thursday in Bond, Clay, Clinton, Edgar, Richland and Sangamon counties seeks court orders declaring there is no public health emergency as defined by Pritzker’s Public Health Department. The state capital of Springfield is in Sangamon County.

Plaintiffs in each case seek injunctions against the disaster declaration that Pritzker is using to justify restrictions on public interaction to limit transmission of the virus.

he state has reported 7,367 deaths among 167,000 confirmed cases of COVID-19, the illness caused by the coronavirus. Most have been in Chicago and Cook County, which are hundreds of miles north of the counties where the suits were filed.

SEATTLE — Washington’s governor is tightening restrictions throughout the state in restaurants and bars, for weddings and funerals, and at gyms in a further effort to stem a surge in coronavirus infections.

Gov. Jay Inslee said Thursday that the rate of disease transmission has been increasing in the state.

For restaurants, tables for indoor dining will be limited to members of the same household and alcohol service must end at 10 p.m. Bars, taverns, breweries, wineries and distilleries must cease all indoor service, regardless of whether food is served.

Wedding ceremonies still will be allowed, but receptions are prohibited, though those in the next two weeks can can take place under previous guidelines.

The former New York Yankees relief pitcher is a Trump supporter and looked on as the president announced Thursday that he is canceling the Florida portion of the Republican National Convention next month.

Trump praised Rivera’s work with children and his records as a closer for the Yankees, the president’s favorite team. He has previously awarded the Presidential Medal is Freedom to Rivera.

It was not immediately clear why Rivera was at the briefing. Rivera’s old team is in Washington to open Major League Baseball’s abbreviated season Thursday night against last year’s World Series champion, the Washington Nationals.

TOPEKA, Kan. — Kansas’ attorney general says he believes both counties and local school districts can exempt themselves from the governor’s order requiring schools to have staff and students wear masks because of the coronavirus outbreak.

Attorney General Derek Schmidt Schmidt said Thursday a state law on the pandemic enacted in June allows counties to opt out of the order and the state constitution gives local school districts the authority to do the same.

Gov. Laura Kelly replied in a scathing statement calling Schmidt wrong and accusing him of creating “more hurdles and uncertainty” during the pandemic.

Kelly issued her masks-in-schools order Monday, imposing rules that are stricter than guidelines set by the State Board of Education.

City officials said Thursday that about 40 such hubs offering meals, outside play and adult help will be scattered at libraries, recreation centers and cultural centers.

Like most other school districts in California, San Francisco’s public schools are starting the academic year with online learning because of the coronavirus pandemic. But not all children have internet access, computers or parents at home to help and the program is an effort to lessen disparities.

The plan must get state and local approval.

PARIS — France is reporting a sharp uptick in coronavirus cases, with more than 1,000 new infections on Thursday, as people let their guard down heading into the country’s summer break.

Health authorities say cases on the French mainland have surged by 66% in the past three weeks, with a 26% increase in the last week alone. Concerns about rising cases had already prompted the government to make mask-wearing mandatory in all indoor public spaces this week.

In their daily update on France’s outbreak that has already killed 30,182, health authorities said people aren’t taking as much care to socially distance and that “our recent habits have favored the spread of the virus for several weeks now.”

“During the summer and the holidays, it can seem artificial to keep one’s distance when greeting each other, to keep apart when chatting, to regularly wash hands and to wear masks in closed spaces. But this individual and collective effort is crucial to prevent the virus from trampling on our freedom and the epidemic from rebounding.”

COLORADO SPRINGS, Colo. — All cadets at the Air Force Academy will return to the Colorado Springs campus in the fall, making the university one of the first in the country to return during the coronavirus pandemic.

KCNC-TV reported that Secretary of Defense Mark Esper declared Thursday that military training pipelines are “mission essential,” meaning that all cadets are expected to return within the next week.

The order came after academy leaders sent non-seniors home in March to finish the year online and kept the remaining students on campus. Officials say the entire cadet wing, making up about 4,000 students, will be back on campus by the end of the month.

CHICAGO — The American Academy of Pediatrics has announced new recommendations for kids’ sports during the pandemic to minimize risks of COVID-19.

They include masks for young athletes in non-vigorous activities when social distancing isn’t possible; practicing in small pods that don’t switch players, and not sharing equipment.

Because the virus spreads most easily with prolonged, close contact with an infected person, risks to young athletes will likely depend on the type of sport, number of players and indoor versus outdoor setting, the academy said in the guidance posted online Wednesday.

“Risk can be decreased but not eliminated, by athletes, parents, coaches and officials following safety protocols,” the academy said.

JOHANNESBURG — South Africa’s president says all public schools will “take a break” for the next four weeks as the country braces for its highest surge yet of coronavirus infections.

President Cyril Ramaphosa in a national address says “the coronavirus storm has indeed arrived” and schools should not be sites of virus transmission as confirmed cases surpass 400,000 and deaths surpass 6,000.

Schools have been one of the most sensitive issues as South Africa tries to balance fighting the pandemic and protecting the livelihoods and futures of its 57 million people.

Ramaphosa acknowledges that disruptions in education can have a “devastating impact on the prospects of a generation of young people.” The current academic year will now be extended beyond the end of 2020. South Africa makes up more than half of Africa’s confirmed virus cases. 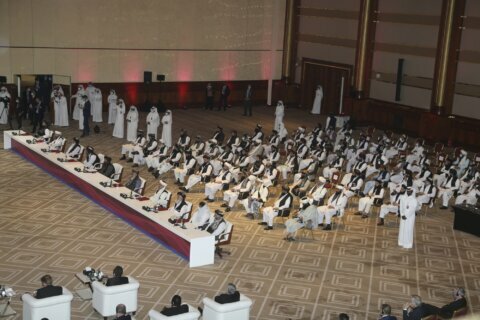