MITO, Japan (AP) — Shares were mixed in Asia on Wednesday, with Australia’s benchmark down more than 1% on reports of a sharp rise in coronavirus cases in the Melbourne area.

Benchmarks rose in Tokyo, Shanghai and Seoul but fell in Hong Kong.

Adding to unease was a report by the U.S. Centers for Disease Control that the number of coronavirus cases in some states is much higher than has been reported. Experts have said all along that the toll from the COVID-19 pandemic is much higher than the confirmed cases would indicate, due to issues with testing and data collection.

Australian media reports said authorities would be announcing a sharp rise in coronavirus cases in the state of Victoria, home to the country’s second largest city, Melbourne.

Melbourne was put under lockdown as infections spread, with numbers of new cases rising into the hundreds daily.

Uncertainty over prospects for more financial aid to Americans and U.S. businesses also is casting a shadow, analysts said. The Republican Party and Democrats remain divided over how much support is needed, as states grapple with rebounds in cases that have prompted some local governments to order some businesses to close to help snuff out flare ups of the virus.

“Asia markets are not expected to share in the cheer this midweek with some doubts cast on progress in delivering the next fiscal support for the U.S. economy,” Jingyi Pan of IG said in a commentary.

On Wall Street, shares edged higher overnight despite a late stumble that nearly wiped out the market’s gains for the day. The S&P 500 added 0.2% to 3,257.30 for a third straight gain.

Treasury yields were mostly lower and the price of gold rose 1.5%, signs of continuing caution in the market.

The Federal Reserve’s efforts to support markets and expectations that Washington will deliver more financial aid to help Americans weather the economic downturn have been key in keeping markets mostly pushing higher since stocks plunged in March.

The overall S&P 500 index has rallied back to within 3.9% of its record set in February and is back to where it was in early June.

Still, worries remain that the rise of coronavirus counts across much of the country will derail efforts to reopen businesses shut down due to the pandemic. That’s why Wall Street is betting on Washington to deliver another trillion-dollar round of economic aid.

Investors also had their eye on the latest batch of quarterly report cards from companies. Coca-Cola rose 2.3% and Philip Morris International gained 4.2% after the companies reported earnings in the latest quarter that beat analysts’ forecasts.

Among the other big companies reporting results this week: Microsoft and Tesla issue results on Wednesday, Intel, AT&T and Twitter report on Thursday and Verizon Communications and American Express report earnings Friday.

The yield on the 10-year Treasury was steady at 0.60% after slipping to 0.59% late Tuesday. The yield is a benchmark for interest rates on mortgages and other consumer loans.

In the commodities markets, the price of benchmark U.S oil gave up 34 cents to $41.58 per barrel in electronic trading on the New York Mercantile Exchange. It jumped 2.8% to settle at $41.96 a barrel on Tuesday. Brent crude oil, the international standard, lost 32 cents to $44.00 per barrel. 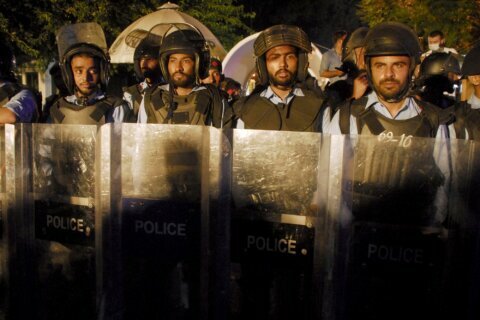