WASHINGTON (AP) — President Donald Trump spread a number of false and misleading claims about the World Health Organization in announcing his decision to cut U.S. ties with the agency over the coronavirus epidemic.

Trump last week said he would halt funding and a decades-long U.S. relationship with WHO, accusing it of being effectively controlled by China and misleading the world about the virus. The president referenced his May 18 letter to WHO Director-General Tedros Adhanom Ghebreyesus that laid out specific allegations and demanded changes.

An AP Fact Check finds numerous inaccuracies in that letter.

Trump accuses WHO of ignoring scientific reports in December of the virus spreading in China that didn’t exist and assails the group for criticism of a U.S. travel ban on China that it never lodged. He also overstates the level of knowledge about human transmission of the virus at the time.

Trump’s escalating actions, which have drawn heated responses from China, come as his administration faces criticism for a botched U.S. response to the outbreak, including testing delays. The death toll for Americans has surpassed 100,000, the most in the world.

A look at some of his claims and reality:

TRUMP: “Because they have failed to make the requested and greatly needed reforms, we will be today terminating our relationship with the World Health Organization and redirecting those funds.” — remarks Friday.

THE FACTS: It’s unclear whether the president can unilaterally withdraw the U.S. from WHO without approval from Congress.

Lawrence Gostin, director of the World Health Organization Collaborating Center on National and Global Health Law at Georgetown University, said in tweets Friday that Trump’s move is “unlawful” because ending funding requires Congress, which has already authorized the money. He called it “dangerous” because “we’re in the middle of a pandemic.”

“Trump has no power to do it,” Gostin wrote.

Congressional Democrats said in April, when the president first proposed withholding money from WHO, that it would be illegal without approval from Congress and that they would challenge it. House Speaker Nancy Pelosi on Friday called the move “an act of extraordinary senselessness.”

TRUMP: “The World Health Organization consistently ignored credible reports of the virus spreading in Wuhan in early December 2019 or even earlier, including reports from the Lancet medical journal. The World Health Organization failed to independently investigate credible reports that conflicted directly with the Chinese government’s official accounts, even those that came from sources within Wuhan itself.” — May 18 letter.

THE FACTS: No such study existed in December, according to the Lancet.

The Lancet said the first papers it published on the coronavirus came from Chinese and Hong Kong researchers on Jan. 24. There was no report in December “referring to a virus or outbreak in Wuhan or anywhere else in China,” the journal said.

The outbreak was detected by Wuhan doctors only in late December. Gao Fu, the head of China’s Centers for Disease Control, found out about it on Dec. 30, 2019, after notices issued by Wuhan health officials leaked online.

WHO was alerted to a “cluster of atypical pneumonia” via media reports and its own surveillance system on Dec. 31, and it requested information from China on Jan. 1.

“In the first weeks of January WHO was very, very clear; we alerted the world on Jan. 5th,” Michael Ryan, executive director of WHO’s Health Emergencies Program, told reporters on April 15. “Systems around the world, including in the U.S., began to activate their emergency management systems on January 6th.”

Retrospective studies, published in the Lancet and elsewhere, have shown that the first known patients fell ill with the virus at the beginning of December or even earlier, but those cases were not detected until much later. Health experts say it is extremely difficult to detect a new pathogen, especially during the winter flu season, and that Chinese doctors identified the new coronavirus quickly by global standards. There is no evidence that top Chinese officials or WHO were aware of the virus before Dec. 30.

WHO last month agreed to launch an independent probe into how it managed the international response to the virus.

THE FACTS: He’s overstating the level of knowledge about human transmission of the virus at the time.

Officials in Taiwan did send an email on Dec. 31 to WHO that requested more information about the outbreak in Wuhan, but it does not mention “human-to-human transmission.” The email said “at least seven atypical pneumonia cases were reported in Wuhan, China” and noted that patients had been isolated for treatment.

The Taiwan CDC argues that public health professionals could discern from its wording about patients being isolated that there was a real possibility of human-to-human transmission of the disease, but acknowledges it did not “directly and conclusively” state that.

WHO says it never received information at the time specifically referencing human transmission.

TRUMP: “On January 14, 2020, the World Health Organization gratuitously reaffirmed China’s now-debunked claim that the coronavirus could not be transmitted between humans, stating: ‘Preliminary investigations conducted by the Chinese authorities have found no clear evidence of human-to-human transmission of the novel coronavirus (2019-nCov) identified in Wuhan, China.’ This assertion was in direct conflict with censored reports from Wuhan.” — May 18 letter.

THE FACTS: He isn’t providing the full context.

It’s true that a WHO tweet cited “no clear evidence” of human-to-human transmission. But the organization also didn’t rule out the possibility. At a news briefing that same day, Maria Van Kerkhove, acting head of WHO’s emerging diseases unit, allowed that there could be limited cases of human transmission.

TRUMP, referring to China’s Xi Jinping: “On January 28, 2020, after meeting with President Xi in Beijing, you praised the Chinese government for its ‘transparency’ with respect to the coronavirus, announcing that China had set a ‘new standard for outbreak control’ and ‘bought the world time.’ You did not mention that China had, by then, silenced or punished several doctors for speaking out about the virus and restricted Chinese institutions from publishing information about it.” — May 18 letter.

THE FACTS: Tedros did repeatedly praise China’s transparency and pandemic response even as evidence mounted that it had failed to notify the public about a looming crisis. But Trump early on did also.

In a CNBC interview on Jan. 22, Trump was asked if he trusted information from China about the coronavirus. “I do,” Trump said. “I have a great relationship with President Xi.”

Two days later, he was even more effusive. “China has been working very hard to contain the Coronavirus,” he tweeted. “The United States greatly appreciates their efforts and transparency. It will all work out well. …I want to thank President Xi!”

Trump kept up the compliments when asked several times in February about whether data from China can be trusted. He called Xi “extremely capable” and said he’s “doing a very good job with a very, very tough situation.”

His praise ultimately faded as the pandemic hit hard in the U.S. and the federal response stumbled.

It’s unclear how much impact WHO would have had if it did press China for more transparency, given the United Nations agency’s inability to punish member countries. WHO is constrained by rules that rely on the goodwill of its 194 members and relies on Beijing’s cooperation to mount a global response to the pandemic.

TRUMP: “They strongly recommended against me doing the early ban from China, but I did it anyway and was proven to be 100% correct.” — remarks Friday.

TRUMP: “You also strongly praised China’s strict domestic travel restrictions, but were inexplicably against my closing of the United States border, or the ban, with respect to people coming from China. I put the ban in place regardless of your wishes.” — May 18 letter.

THE FACTS: He’s exaggerating the magnitude of his travel restrictions on China and overstating WHO’s position. WHO has cautioned against such restrictions as a general matter, saying they often prove ineffective in stemming the spread of an infectious disease, but it never publicly questioned or singled out Trump’s decision.

Trump in fact didn’t “ban” all the people infected with coronavirus from entering the U.S. from China.

His order in late January temporarily barred entry by foreign nationals who had traveled in China within the previous 14 days, with exceptions for the immediate family of U.S. citizens and permanent residents as well as American citizens.

There were many gaps in containment and initial delays in testing, leading to the U.S. rising to No. 1 globally in the number of people infected by COVID-19 and the number of deaths last week surpassing 100,000. 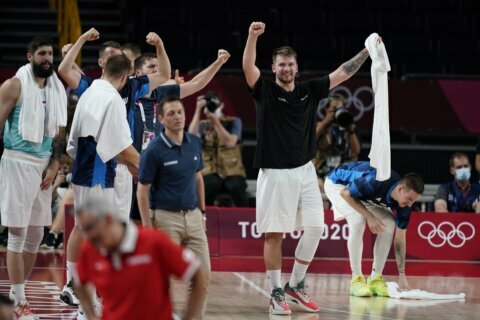