CANBERRA, Ausrtralia (AP) — A lawyer charged with conspiring to reveal classified information to expose a diplomatic scandal appeared in…

Both are at the center of a campaign in Australia to wind back national security laws that infringe on press freedom and to provide legal protections for whistleblowers who expose government wrongdoing.

The documents McBride leaked formed the basis of an ABC investigation broadcast in 2017. The ABC reported growing unease in the Australian Defense Force leadership about the culture of the special forces, and that Australian troops had killed unarmed men and children in 2013.

Collaery will stand trial this year charged with conspiring with a former spy to reveal classified information supporting an allegation that Australia illegally bugged East Timor’s government during negotiations over the sharing of billions of dollars in oil and gas revenue in 2004.

The spy, known only as Witness K, has indicated he will plead guilty.

Collaery told the court on Friday that there would be a hearing on whether McBride was immune from prosecution under the Public Interest Disclosure Act because the documents were leaked in the public interest. That hearing will likely be held in September.

McBride was released on bail until his next court appearance on Feb. 24.

McBride had been representing himself in his court appearances until Friday and had hoped for a trial early this year.

On Thursday, he launched a GoFundMe appeal for legal funds that said: “I am facing 50 years in prison for blowing the whistle on the Australian Defense Force’s unethical, harmful and highly politicized leadership.”

“I need a solicitor to organize the case and I guess I’ve become convinced that the case is bigger than me and these issues need to be properly ventilated,” McBride told reporters outside court.

McBride said he qualified for legal aid and had made inquiries to the Legal Aid Commission, but “it just seemed like they weren’t going to take the government on.”

“I’m justified in exposing corruption and I need a lawyer who is going to run that line,” McBride said.

McBride said he had hired lawyer Natalija Nikolic, but Collaery was not a permanent part of his legal team.

More than a dozen free speech advocates demonstrated in support of McBride outside the court.

“Covering up war crimes is what endangers us,” demonstrator James Lindsay said. “It endangers who we are.” 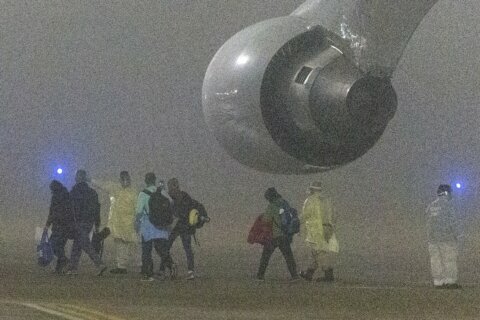