Strong 2Q for Tapestry, though China outbreak takes its toll

The luxury brand Tapestry handily beat quarterly profit expectations but warned that the virus outbreak in China is “significantly impacting” its business.

The owner of Coach and Kate Spade said Thursday that the majority of its stores in China are now closed.

Chinese health authorities have reported 563 deaths from the outbreak and the number of confirmed cases jumped sharply to 28,018. Outside mainland China, at least 260 cases have been confirmed, including two deaths in Hong Kong and the Philippines.

Tapestry expects sales in the second half of the year could be clipped by $200 million to $250 million because of the outbreak. Per share profits may be reduced by 35 and 45 cents.

The New York company cautioned that the impact could be more significant if the situation worsens or the outbreak affects demand outside of China.

Greater China comprises 15% of Tapestry’s business, compared with 61% for North America. By brand, Stuart Weitzman gets 21% of its business from Greater China, while Coach and Kate Spade get 18% and 4%, respectively.

Tapestry had 366 directly operated stores in China as of its second quarter, including 306 on the mainland, 30 in Hong Kong and Macau, and 30 in Taiwan. On mainland China, there’s 53 Kate Spade stores, 207 Coach and 46 Stuart Weitzman stores.

Total sales for Tapestry in China and its territory last year reached $913 million, according to a regulatory filing. By Brand, Coach had $779.8 million in sales, while Kate Spade had $52.9 million and Stuart Weitzman had $80.2 million.

“We are confident in our ability to effectively navigate through this period of uncertainty,” said Chairman and CEO Jide Zeitlin in a prepared statement. “We are managing our response to best protect our people, our brands and every aspect of our business.”

Removing one-time costs, earnings were $1.10 per share. Analysts surveyed by Zacks Investment Research were looking for 98 cents per share.

Tapestry said Thursday that it now anticipates annual earnings of about $2.15 to $2.25 per share on revenue of approximately $5.9 billion. That, the company said, also accounts for the potential negative impact from the spreading coronavirus.

Industry analysts polled by FactSet had been projecting 2020 earnings of $2.51 per share on revenue of $6.1 billion.

Portions of this story were generated by Automated Insights (http://automatedinsights.com/ap) using data from Zacks Investment Research. Access a Zacks stock report on TPR at https://www.zacks.com/ap/TPR 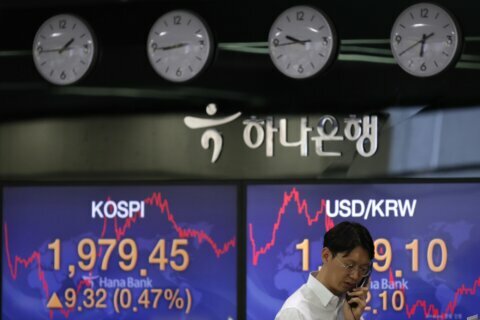