Stocks fell and bond prices rose sharply on Wall Street Friday amid signs that economic fallout from the viral outbreak that originated in China is hurting U.S. companies.

The yield on the 30-year Treasury reached a record low as investors sought the safety of U.S. government bonds. The price of gold climbed 1.7%.

Investors have been trying to gauge how damaging the virus outbreak will be to corporate earnings, and whether supply chain interruptions, softer sales and other problems stemming from travel restrictions, business and factory closures in China will continue to hurt companies well beyond the first quarter.

Several better-than-expected reports on the economy helped raise optimism earlier this week that the outbreak is not having a broad impact on the U.S. economy, but Friday’s clunker from IHS Markit fueled doubts.

Preliminary data suggest U.S. business activity pulled back in February, the first month of contraction since 2013. Economists had expected the survey of manufacturers and service companies to show another month of growth.

Much of the drop-off was due to a weaker services sector, where output fell for the first time in four years, “but manufacturing also ground almost to a halt due to a near-stalling of orders,” IHS chief business economist Chris Williamson said in a statement. He attributed some of the month’s deterioration to the viral outbreak, which weakened demand for travel and tourism.

One encouraging sign in the report was that businesses seem optimistic the slowdown will be only short-lived.

For now, companies like Coca-Cola continue to grapple with the economic fallout of the outbreak. The beverage giant is the latest big name to warn investors about the potential impact on its finances from the outbreak. China is a big market for the company, and Coke now expects a hit of 2 cents per share to its first-quarter profit.

Universal Display, which makes LED-technology for televisions and other products, expects the virus to hurt orders in 2020. The International Air Transport Association said the virus threatens to erase $29 billion of this year’s revenue for global airlines, mostly for Chinese carriers.

South Korea said 204 people have been infected with the virus, quadruple the number of cases it had two days earlier. More than 76,000 people have been infected globally, with most of the cases and deaths centered in China. That nation’s leadership on Friday shifted to a more cautious tone and said it has not yet reached a turning point for the virus and the situation in the hardest hit province remains grave.

The yield on the 30-year Treasury reached a record low of 1.886%, according to Tradeweb. It was 1.98% late Thursday. The yield on the more closely followed 10-year Treasury fell to 1.47% from 1.52%. That yield, which is a benchmark for mortgages and other kinds of loans, was close to 1.90% at the start of this year.

Expectations have been building among traders that the Federal Reserve will need to cut interest rates this year to help the economy. They’re pricing in a 90% probability of at least one cut this year, up from an 85% probability a day ago and a 58% probability a month ago.

Technology companies accounted for much of the selling Friday. Chipmakers, which rely heavily on China for both sales and supply chains, were some of the worst hit. Advanced Micro Devices slid 7%, while Nvidia fell 4.7%.

General Motors lost 1.8% and other automakers slipped as the virus hurts auto sales in China.

Real estate companies and utilities held up better than the rest of the market.

Deere’s latest quarterly report card was a bright spot. Its shares jumped 7% after the farm equipment maker handily beat Wall Street’s fiscal first-quarter profit forecasts. The company is coming out of an extended period in which it was bruised by the ongoing trade war between the U.S. and China.

Virus deaths slow in places, but British premier gets worse

The Latest: Lockdown in Philippines extended to April 30 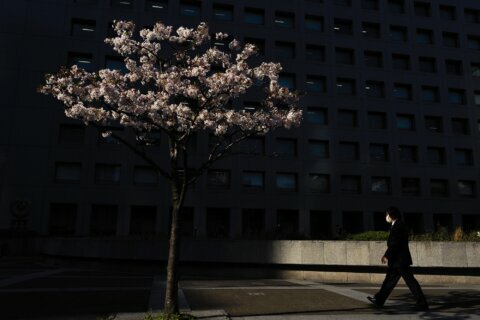