WASHINGTON (AP) — President Donald Trump on Friday wouldn’t commit to signing bipartisan legislation supporting pro-democracy activists in Hong Kong as he tries to work out a trade deal with China.

Trump’s comments came after the House and Senate this week passed the Hong Kong Human Rights and Democracy Act in reaction to anti-government protests that have convulsed the semi-autonomous Chinese city for more than five months.

The bill authorizes sanctions on Chinese and Hong Kong officials involved in human rights abuses and would mandate the State Department to annually review special autonomous status that the U.S. grants Hong Kong on trade.

“Look, we have to stand with Hong Kong,” Trump said in an interview on “Fox & Friends.” He continued: “But I’m also standing with President Xi (Jinping). He’s a friend of mine. He’s an incredible guy.”

At an unrelated event later Friday, Trump said he would give the Hong Kong bill a long look.

White House officials did not respond to a request for comment on where Trump stood on the legislation.

“For a guy who promised to be tough on China, President Trump’s reliable deference to President Xi is all the more bewildering,” Schumer said. “Being tough on China when it comes to human rights will also help us win the battle on trade.”

Trump said he asked Xi not to send in the military to stamp out the protests. The president added that he told Xi that efforts to quash the protests would complicate negotiations for a U.S.-China trade deal.

China has warned it will retaliate against the U.S. if Trump signs the bill supporting the Hong Kong protests.

Trump noted U.S. and China “are in the process of making the largest trade deal in history.”

Trump asserted if it weren’t for him, China would have responded to the unrest in Hong Kong with brutality, potentially killing thousands in the process. “The only reason he’s not going in is because I’m saying, ‘It’s going to affect our trade deal, you don’t want to do that,’” Trump said. 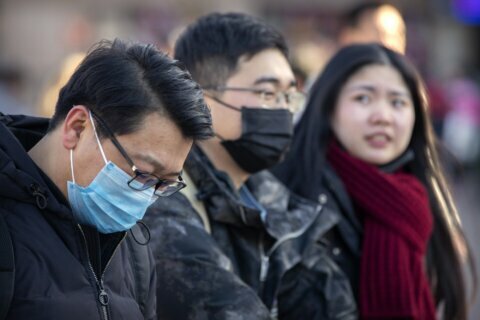