4 South Koreans arrested over break-in at US envoy compound

SEOUL, South Korea (AP) — South Korea police have formally arrested four anti-American students who broke into the U.S. ambassador’s residence in Seoul last week while protesting the Trump administration’s demands for the country to pay more to help cover the costs of keeping U.S. troops there.

The Seoul Central District Court said Tuesday its judges granted arrest warrants for the four students over concerns that they would attempt to flee or destroy evidence.

Judges denied warrants for three other students who had smaller roles in the protest and were more cooperative with the investigation.

Police also on Tuesday searched the office of a Seoul-based activist group that was supposedly involved in organizing the protest.

Police initially detained 19 university students Friday afternoon at the residence of Ambassador Harry Harris after 17 of them used two steel ladders to climb over the compound’s wall and shouted anti-U.S. slogans before officers dragged them out.

At the time of the protest, Harris was at Seoul’s presidential Blue House attending a reception hosted by President Moon Jae-in.

The U.S. State Department expressed “strong concern” over the illegal entry and urged South Korea to strengthen its efforts to protect diplomatic missions.

The demonstrators were members of a leftist student group, which on Tuesday issued a statement denouncing the arrests over what it described as a “righteous struggle” and accused the United States of violating South Korea’s sovereignty with excessive demands on defense payments.

“Although four university students have been arrested, we will not back off and will put up a fiercer fight than before,” the group said.

Officials from Seoul’s Naedaemun district police station didn’t immediately comment on when they plan to send the case to state prosecutors, who have exclusive authority to indict suspects, or what kind of punishment would be possible.

Under South Korean law, staging banned protests at diplomatic missions is punishable by a prison term of up to one year or a fine of up to 1 million won ($854).

The United States sets off anger for some leftist South Koreans due to its role in Korea’s turbulent modern history. Although the U.S. backed the South during the Korean War, some anti-U.S. activists view the presence of about 28,500 U.S. troops here as an obstacle to the reunification of North and South Korea.

Washington and Seoul are preparing for another round of negotiations on sharing the costs for the U.S. military presence. The countries struck a one-year deal in February in which South Korea agreed to contribute about 1.04 trillion won ($880 million) for 2019, which was an 8.2% increase from last year. 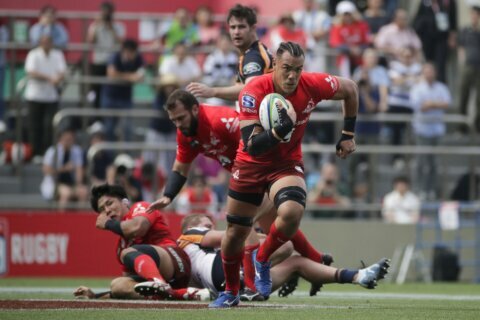 Sunwolves out of Super Rugby after time runs out in pandemic