China’s government, turning 70, tells its story at the UN

UNITED NATIONS (AP) — Four days before its communist government’s 70th birthday, China on Friday condemned protectionism and unilateralism as “major threats,” took not-entirely-subtle shots at U.S. economic policies and proudly pronounced itself “a country that is open and on the move.”

With Chinese President Xi Jinping not attending this year’s U.N. General Assembly, it fell to Foreign Minister Wang Yi to tell the story of the People’s Republic of China at the seven-decade mark. He did so with dispatch and style, plowing through a speech that outlined many of his country’s accomplishments, challenges, philosophies and international beefs.

He called China “an anchor of stability for world peace” and much more.

“Seventy years ago, China put an end to a period in modem history in which the country was torn apart and trampled upon. We stood up and became true masters of our country,” Wang said.

The current chapter for China, a culture thousands of years old, began on Oct. 1, 1949 when Mao Zedong stood at a microphone atop Tiananmen Square in Beijing and declared a new government in the nation his communist guerrillas took from Chiang Kai-shek’s Nationalists after a civil war.

When Mao died in 1976 after an extraordinary tenure punctuated by repression, famine and party intrigue, China began a period known as “reform and opening up.” Senior leader Deng Xiaoping engaged with the West, re-established diplomatic relations with the United States and began a period of economic, technological and developmental growth — a “socialist market economy” that drove China to where it is today.

Which is, among other things, in a major trade dispute with the United States — a tariff battle that threatens global economic growth. That was not lost on Wang during his address at the U.N., where a large anniversary display in a heavily trafficked foyer offers onlookers a photo history of the world’s most populous nation under communist rule.

“Erecting walls will not resolve global challenges, and blaming others for one’s own problems does not work,” he said, in a reference likely aimed at the United States. “Tariffs and provocation of trade disputes, which upset global industrial and supply chains, serve to undermine the multilateral trading regime and global economic and trade order. They may even plunge the world into recession.”

“Facing the headwinds of protectionism,” he said, “we should not just stand idly by.”

China is offering to narrow a trade surplus with the United States by purchasing more American exports. But the Beijing government is resisting pressure from Washington to roll back technology plans that their trading partners say violate Beijing’s free-trade commitments and hurt foreign competitors.

U.S. President Donald Trump postponed a planned tariff hike on Chinese goods ahead of the 13th round of talks in Washington in early October. Beijing has lifted punitive duties on soybeans in a move that helps both American farmers and Chinese pig breeders who need soy as feed.

Wang, whose address at times read like a listicle about “Things China Has Accomplished,” was not shy about touting the formidable progress made by his nation, which he said “has done, in just seven decades, what it took some countries hundreds of years to complete.” Chinese often express pride at the speed of their nation’s progress and the rise in living standards for many since the country began to open to the larger world after Mao died in 1976.

Not unexpectedly, Wang cited growth and development as the engines behind China’s successes thus far. “Development,” he said, “is the master key to solving all problems.”

China is in the midst of a major, multipronged global strategy called the Belt and Road Initiative, which is developing infrastructure projects in concert with scores of other nations and organizations. Beijing calls it a significant contribution to environmentally friendly growth, but others see it as an influence play designed to extend the country’s footprint even further.

In his speech, Wang exhorted other countries to “seize the development opportunities” that the Belt and Road Initiative has created.

Overall, however, his speech seemed almost a position paper for China at age 70. It cast the country under Xi as a defender of peace and justice, an advocate of the principle of independence and a committed multilateralist — all assertions that the government’s adversaries have taken issue with.

China has long emphasized what it calls its commitment to multilateralism, a stance that has become even more persuasive to other nations since Trump took office in 2017 and began to pursue an “America first” policy that has unsettled enemies and allies alike.

On Friday, on the sidelines of the U.N. meeting, Wang showed off another side of China’s trajectory, officially collecting another in a spate of smaller countries that have ended diplomatic relations with Taiwan, the self-governed island that Beijing claims as part of its territory. Chiang’s defeated Nationalist government retreated there in 1949 after being vanquished by Mao’s Red Army.

Wang and the president of the island nation of Kiribati signed a document re-establishing relations. An announcement by China’s official Xinhua News Agency cited the upcoming 70th anniversary and said the renewed China-Kiribati relationship “will undoubtedly add glory to this important historical moment.”

“Over the past seven decades, China has turned itself from a closed, backward and poor country with a weak foundation into a country that is open and on the move,” Wang said in his speech.

“Let me make it very clear,” he told the global audience gathered at the United Nations. “China is a country with a 5,000-year civilization, 1.4 billion hardworking and courageous people, and a vast land of 9.6 million square kilometers. China will not ever be cowed by threats or subdued by pressure.”

Ted Anthony has written about international affairs for The Associated Press since 1995. He was AP’s Beijing news editor from 2001 to 2004 and director of Asia-Pacific news from 2014 to 2018. Follow him on Twitter at @anthonyted. 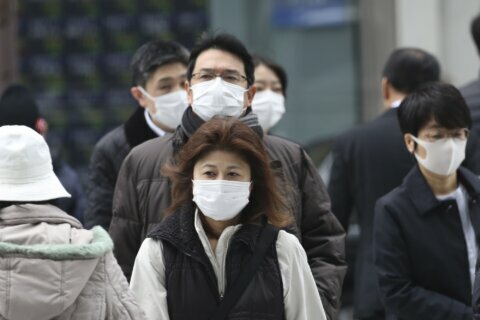 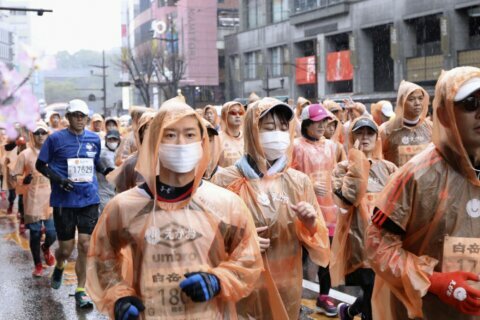