SEOUL, South Korea (AP) — Dozens of people opposed to dog meat consumption, including American actress Kim Basinger, rallied near the National Assembly in Seoul on Friday on one of three “dog meat days” in South Korea.

About 20 others stood nearby calling for legalization of dog meat. There were no reports of violence.

Under a traditional calendar, Friday is thought to be the first of three hottest days in South Korea. Many South Koreans believe that eating dog meat or chicken soup on those days gives them strength to beat the heat.

“They do not need your tears, they need your help,” Basinger said of the dogs. “We have to end this cruelty on this planet. We have to help anything suffering.”

The protesters held placards that read “How Many Millions Have to Die Before Dog Meat Ends?” They also put mock dog carcasses on a table.

About 10 meters (30 feet) away, farmers who raise dogs that are sold to restaurants brought steamed dog meat and ate it with kimchi.

Dog meat is neither legal nor explicitly banned in South Korea. Dog meat restaurants are a dwindling business as younger people find dog meat a less attractive dining option. Pets are growing in popularity, and a survey last year indicated that about 80% of South Koreans had not eaten dog meat in the previous year.

Many people still oppose outlawing dog meat because they view it as surrendering to Western pressure. Some older people believe that dog meat enhances sexual stamina.

US says mystery crash in Afghanistan was US army plane 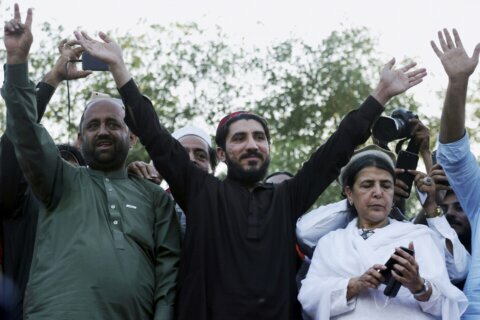