BANGKOK (AP) — World shares were mostly higher on Friday after Wall Street ended overnight with the Dow Jones Industrial Average closing above 27,000 for the first time.

This week’s gains have been driven largely by expectations that the U.S. Federal Reserve is poised to cut its benchmark interest rate to help counter slowing growth.

Progress toward resolving the trade war between the U.S. and China looks less clear, with no word of a timetable for further negotiations over the huge U.S. deficit and other complaints from Washington over Beijing’s technology policies and other issues.

China reported Friday that its imports from the United States plunged 31% in June amid a tariff war with Washington while its exports to the U.S. market also weakened, falling nearly 8%.

The trade data had scant impact on regional markets since it came out late in the day.

Stocks have been trending higher for much of the week as investors have grown more confident that the Federal Reserve may cut interest rates for the first time in a decade as soon as the end of this month.

New U.S. government data released Thursday showed consumer prices rose in June from a year earlier. The bump in inflation wasn’t expected to give the Fed reason to reconsider whether it should lower rates, if necessary. Inflation has remained muted through much of the economy’s 10-year expansion, which Federal Reserve Chairman Jerome Powell has cited as a justification for potentially lowering rates.

“With the latest inflation data uptick led by volatile categories, equity investors quickly brushed it aside and continued to relish in the afterglow of a far more dovish than expected Chair Powell as rate cut fever remains alive and well,” Stephen Innes of Vanguard Markets said in a commentary.

ENERGY: Benchmark crude oil rose 10 cents to $60.30 per barrel in electronic trading on the New York Mercantile Exchange. On Thursday, it lost 23 cents to settle at $60.20 a barrel. Brent crude oil, the international standard, added 23 cents to $66.75 per barrel. It dropped 49 cents to close at $66.52 a barrel in London. 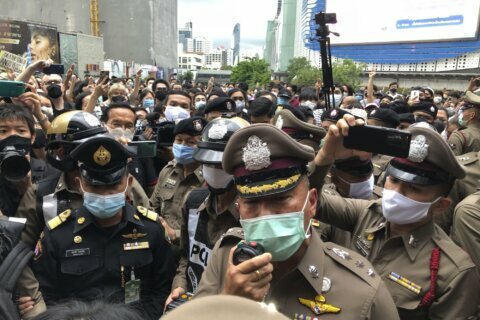