The Latest: Patrick Reed advances to weekend without wedge

PEBBLE BEACH, Calif. (AP) — The Latest on the second round of the U.S. Open at Pebble Beach (all times local):

Patrick Reed survived to play the weekend at the U.S. Open, but his wedge didn’t.

The former Masters champion broke the wedge in half over his knee after flubbing a chip on the 18th green, then had to get up-and-down to make the cut at Pebble Beach.

Reed was even par for the tournament heading into the last hole. After hitting his third shot into the deep rough over the green, he chipped the ball back into the rough to the side of the green.

Reed barely advanced the chip a foot or so, and angrily broke it over his knee. He took another wedge, chipped 2 feet past the hole and made the putt for a double-bogey 7.

Reed made the short putt to make the cut on the number.

Gary Woodland escaped from a divot to birdie his final hole Friday and take a two-shot lead into weekend play at the U.S. Open.

Woodland was at 9 under after two rounds, two ahead of Justin Rose and three ahead of Louis Oosthuizen. Rory McIlroy was another shot back, tied with Aaron Wise.

Woodland, a three-time winner on the PGA Tour, hit his tee shot into a divot on his last hole, the ninth. He managed to get his second shot on the green, then made a long birdie putt to finish his round.

Woodland finished with a 6-under 65 to tie the Open scoring mark at Pebble set by Tiger Woods in 2000 and matched by Rose on Thursday.

Rory McIlroy rebounded from a mini meltdown on the back nine to make two straight birdies Friday and get in the clubhouse at 5 under, three shots off the lead in the U.S. Open.

McIlroy was within a shot of the lead on the back nine. But then he bogeyed the 13th hole, and made a double bogey with a wedge in his hand on the par-5 14th. But he came back with two straight birdies for a 69 that put him in contention going into the weekend.

The 2011 Open winner is going for his second national championship in a row. He won the Canadian Open over the weekend in a rout that included a final round of 61.

Wu has been the biggest surprise Friday in the U.S. Open at Pebble Beach. He was 4 under through 10 holes until a double bogey on the par-4 second hole. The Stanford senior still was at 2 under and looking very much like he’ll be around for the weekend.

Wu won his final match at Stanford as the Cardinal won the NCAA title over Texas. Then, he flew to Ohio and qualified for his first U.S. Open. Wu said after that qualifier that his goal was to make the cut in the U.S. Open, and that maybe he would wear his cap and gown down the 18th fairway of Pebble Beach if he can’t make the commencement.

Graeme McDowell is making a run at another U.S. Open title at Pebble Beach.

McDowell won the Open the last time it was played here in 2010 and is looking to become the first player to win two U.S. Opens at the same course since Jack Nicklaus won at Baltusrol in 1967 and 1980.

Louis Oosthuizen is 1 under through six holes to get to minus 6 for the tournament and is one shot off the lead.

Louis Oosthuizen is the only one of the trio of players teeing off in the afternoon at the second round of the U.S. Open making up ground on leader Justin Rose.

Oosthuizen, Rickie Fowler and Xander Schauffele all shot 5-under 66 in the opening round and are looking to make up a two-shot deficit to Rose at Pebble Beach. Rose followed up his 65 in the first round with a 70 in the morning to move to 7-under par.

Oosthuizen birdied No. 1 to get within one shot of the lead. Fowler and Schauffele started on the back nine and posted bogeys early to fall three shots back.

Aaron Wise shot a 71 in the morning to remain at 5 under and is alone in third place.

No record this time, but Justin Rose still has the lead at the U.S. Open after finishing the second round.

Rose shot 1-under 70 to reach the halfway point at Pebble Beach at 7 under — good for a two-shot lead over Aaron Wise, who shot 71, and a group of three heading out to the course to play in the afternoon.

Rose’s 70 pairs with the 65 he shot Thursday, which matched Tiger Woods in 2000 for the best score at an Open at Pebble Beach.

The Englishman, who won the U.S. Open in 2013 and is currently ranked fourth in the world, saved bogey after losing his tee shot off the cliff to the right of the No. 4 fairway. He saved par from a gnarly lie in the rough to the side of the eighth green.

He played alongside Tiger Woods, who closed with two straight bogeys — his only two of the day — and shot 72 to finish at even par.

The day’s lowest round thus far belongs to Jim Furyk, who shot 67 to reach 2 under. The 49-year-old Furyk is the 2003 U.S. Open champion and was captain of the Ryder Cup team last year.

Another 49-year-old, Phil Mickelson, plays in the afternoon. He’ll start the day at 1 over, which is currently the cut line. The top 60 players and ties will move on for the weekend.

Francesco Molinari’s momentum at the U.S. Open came to a halt when his second shot on No. 8 failed to clear the chasm between the fairway and the green.

After stepping gingerly down the slope to find the ball in an unplayable lie, Molinari took a ride in a golf cart back to the fairway to drop for a penalty shot.

The defending British Open champion made double bogey and fell back to 3-under par after a stretch of three birdies in eight holes had put him in a tie for second at Pebble Beach.

He didn’t lose the ball.

He did lose a stroke.

Justin Rose found the ball he hit over the cliff on the right side of the fourth fairway at the U.S. Open, but instead of playing from there, he chose to take a drop in the fairway with a penalty.

He hit that shot to 8 feet, but couldn’t convert the putt and ended up with a bogey.

Rose’s second bogey of the day sent him into the last five holes of the day at 7 under, two shots ahead of Aaron Wise, who shot 71, and a group of three, including Rickie Fowler, who are set to tee off later this afternoon.

It won’t be enough to make the cut, but Kodai Ichihara will always have a good memory from the U.S. Open.

Ichihara holed out from 199 yards for an eagle 2 on the par-4 second hole — the third toughest hole at Pebble Beach this week.

It’s still early, but the projected cut is 1 over.

Jordan Spieth’s caddie might never hear the end of this one.

Playing out of a high-lipped fairway bunker on the second hole, Spieth barely got the ball over the lip, only to have it hit a rake and get knocked down.

Caddie Michael Greller responded: “There is a rake there.”

Spieth saved bogey with a 5 and dropped to 1 under for the tournament.

On Thursday, Spieth laid into Greller for suggesting the wrong club on a couple of shots.

Producers on the Fox telecast have taken to putting “Caddie: Michael Greller” on the graphic when they flash Spieth’s score before he hits a shot.

Caddies are responsible for raking bunkers, though clearly neither Spieth nor Greller could see the rake on No. 2, which was buried in deep fescue grass on the top.

More red numbers but still the same leader as Justin Rose makes the turn in the second round of the U.S. Open.

Rose made a birdie from the greenside bunker on the 18th hole to get to 8 under, three shots ahead of a group of four players, including Rickie Fowler who had an afternoon tee time.

The first-round leader played the back nine first, shooting 2 under to expand his lead. Playing with him was Tiger Woods, who was 1 under on the day and 2 under for the tournament.

Former champion Jordan Spieth, playing in the same group, shot a 3-under 33 on the back nine to move to 2 under.

Conditions at Pebble Beach were ideal, with light winds and overcast skies. There were 39 players under par.

Justin Rose has made it through his opening five holes with all pars, including two tough saves, and remains in the lead at the US Open.

On a cool, overcast day with condensation that feels like a light mist, no one is off a blazing start. Tiger Woods has one birdie and no trouble. He was four shots behind.

Jordan Spieth birdied three of his first four holes to get within four shots, only to miss the green on the par-5 14th to take bogey.

Two-time defending champion Brooks Koepka was even for the day through six holes and was four behind.

Jordan Spieth is making some noise, trying to get back in the mix at the U.S. Open.

Second round play began in cool temperatures under overcast skies and players were taking advantage of the soft greens at Pebble Beach.

Also in the mix early is Matt Kuchar, who is 2 under for the day and two shots back of Rose, who shot 65 on Thursday to lead after the first round.

Hovland won the U.S. Amateur last summer at Pebble Beach, and he had the low score among 16 amateurs in the field Thursday with a 2-under 69. Two other amateurs broke par in the opening round — U.S. Junior winner Michael Thorbjornsen and British Amateur champion Jevon Rebula.

This will be Hovland’s final event without getting paid. He is leaving Oklahoma State to turn pro and will make his debut next week at the Travelers Championship in Connecticut.

The second round began Friday morning with low clouds off the Pacific Ocean and what felt like a light mist, which is sure to keep the golf course from getting overly firm.

Justin Rose tries to build on his record-tying 65 from the first round that gave him a one-shot lead. He played in the morning alongside Tiger Woods, who was five shots behind. Brooks Koepka opened with a 69. He also plays in the morning wave of the second round.

The cut is made Friday to the low 60s and ties. Among those playing later and hopeful of a low score is Phil Mickelson, who needs only the U.S. Open title to complete the career Grand Slam. 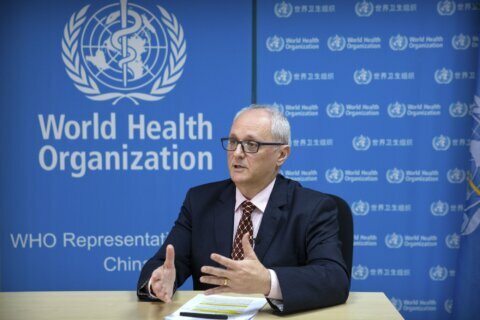 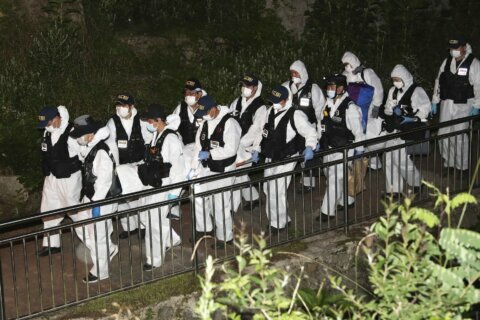 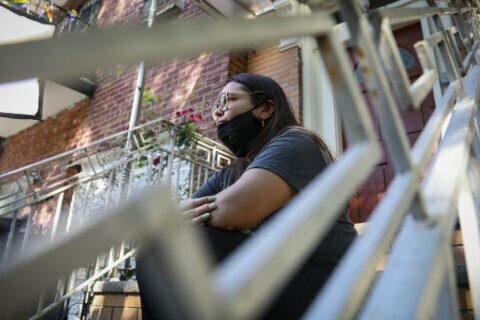