PEBBLE BEACH, Calif. (AP) — Gary Woodland figured the toughest part of his test in the U.S. Open was over Friday at Pebble Beach.

From a thick patch of rough between the bunker and the edge of the ocean on the eighth hole, he pitched up to 15 feet and made a slick putt with severe break for par to keep a clean card and a one-shot lead. Then, he pounded his drive on the 526-yard ninth hole down the middle of the fairway — right into a divot.

Nothing could spoil this day.

Woodland gouged it out with a 7-iron with enough strength to get the ball to the front of the green, and he could only smile when the 50-foot putt dropped for birdie and yet another record at Pebble Beach, not to mention a two-shot lead going into the weekend.

“That was just a bonus,” Woodland said. “Hit a beautiful drive. I was in the divot, a pretty deep divot. We were a little indecisive what we were going to do. We tried to take a little less club and hit it hard and play out to the safe to the right, and it was nice to knock it in.”

His 6-under 65 matched the U.S. Open record at Pebble Beach for the second time in two days, a testament to a course that was only slightly firmer, but still soft enough under a heavy marine layer with so much condensation it felt like a list mist.

Woodland was at 9-under 133, beating by one shot the 36-hole record at Pebble Beach that Tiger Woods set in his record romp in 2000.

The difference: Woods had a six-shot lead in 2000. Woodland’s margin was only two shots over Justin Rose, who had a 70. Louis Oosthuizen didn’t make a par on the back nine until the final hole in his wild round of 70 and was three shots behind.

The weekend remains a mystery.

Rory McIlroy, who kept it together right when it looked as though his round was getting away from him, felt the course was a little faster and could really speed up on the weekend. He was among 10 players separated by five shots halfway through a U.S. Open that so far has run smoothly.

That list includes two-time defending champion Brooks Koepka, who made two late birdies for another 69 and was five shots behind.

“I feel great. I’m excited. I’ve got a chance. That’s all you can ask for,” Koepka said. “I just need to make a few putts. Sometimes the hole just needs to open up. If I can get off to a good start tomorrow, have that feeling where the hole’s opening up, it could be a fun round.”

He made a 10-foot birdie on No. 11, his second hole of the round, and made nothing else the rest of the day. That birdie was the only putt he made longer than 5 feet, and he closed with back-to-back bogeys for a 72 to finish nine shots behind.

Rose set the target early and at one point Friday morning had a four-shot lead until a poor wedge to a front pin on No. 3, followed by an iron off the tee at the short, uphill fourth that peeled right over the edge and into ice plant, forcing him to take a penalty drop and leading to a bogey.

“At this point, there’s not a lot to worry about,” Rose said. “If you’re one ahead, one behind, it’s a lot of golf to be played. But it’s the perfect spot after two days.”

For the second straight day, Pebble Beach was there for the taking, but only for good, smart shots.

McIlroy also made a run at the lead until a bogey from the bunker on the 13th, and a mess on the par-5 14th. With the ball slightly above his feet for his wedge, and knowing that anything left of the pin would go down a slope with gnarly rough, he left it out to the right and watched it roll off the green and into the fairway. Then, he dumped a shot into the bunker and walked off with double bogey.

He answered with a pair of birdies.

“Those were huge to get me back into the tournament,” McIlroy said.

Oosthuizen, the first player to reach the early target set by Rose at 7 under, gave a shot back with a bogey on No. 8, and then another one at No. 10 that started his roller coaster along the inward nine.

“Seven birdies and six bogeys — I’m not a big fan of bogeys,” Oosthuizen said. “But miss these greens, it’s so difficult around the greens in the rough. And you can’t control the ball. You basically are guessing what it’s going to do. And all those loose iron shots, I had tough chips, and end up bogeying probably all of them.”

Phil Mickelson revved up the crowd with three birdies in the opening six holes, and six birdies for the round. He still couldn’t stop the mistakes, however, and Lefty had to settle for a 69. He was eight shots behind, needing to get a little closer in range to seriously think about a shot at the career Grand Slam.

Even with two soft days, and slightly firmer conditions, no one expects it to be easier the rest of the way.

Graeme McDowell, who won the U.S. Open at Pebble Beach in 2010 at even-par 284, ran off four straight birdies early in his round, threw in a few mistakes and was wincing over every birdie chance that burned the edge of the cup. He had to settle for a 70 and was six behind, but still hopeful.

“Anything can happen on this golf course over the weekend,” he said. “You don’t have to do anything fancy tomorrow.”

China: US Xinjiang warning ‘bad for the whole world’ 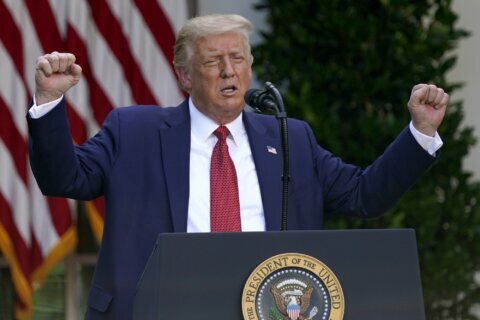 Trump trades arenas for Rose Garden in attack on Biden 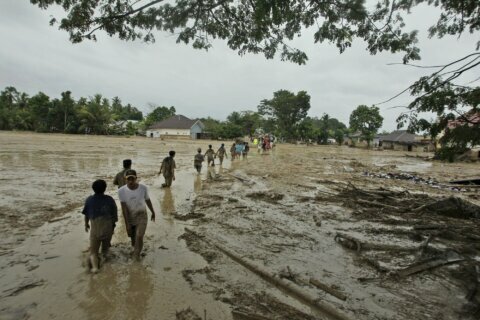