BERLIN (AP) — The Latest on global climate protests by students (all times local):

Police say 16 people have been arrested for blocking traffic during a climate protest in front of New York City’s American Museum of Natural History.

The protesters face charges of disorderly conduct stemming from Friday’s die-in at the museum. The protest was one of several around New York City as thousands of high school students walked out of class.

Thousands of New York City students waged climate protests at locations including Columbus Circle, City Hall, the American Museum of Natural History and a football field at the Bronx High School of Science.

A police spokesman said there were arrests but he did not know how many.

Friday’s protests were part of a global mobilization against climate change by students who want governments to do more to combat it.

A 13-year-old co-coordinator of the New York City climate protest that culminated in a die-in at the steps of the American Museum of Natural History says she is pleased with the number of demonstrators but a big turnout isn’t the point.

Alexandria Villasenor says students will continue to strike, march and engage in civil disobedience but won’t be successful until world leaders take some action. The protest Friday was part of a global effort mounted by students in more than 100 countries.

Hundreds of teenagers and young children holding their parents’ hands are marching through downtown San Francisco to demand action against climate change.

The group of about 1,000 is heading to Sen. Dianne Feinstein’s office and chanting “Climate change is not a lie, we won’t let our planet die!” The march was part of global protests mobilized by students.

Before the march, the young demonstrators held a rally outside House Speaker Nancy Pelosi’s San Francisco office to demand she co-sponsor the “Green New Deal” bill.

The bill spearheaded by Democratic Rep. Alexandria Ocasio-Cortez, of New York, and Democratic Sen. Ed Markey, of Massachusetts, seeks to transform the U.S. economy to combat climate change and create thousands of jobs in renewable energy.

Outside Pelosi’s office, the group wrote “Love our mother earth. She gives us everything,” ”The climate is changing, why aren’t we?” and other messages on colorful sticky paper notes they posted on the building before they started marching.

United Nations Secretary General Antonio Guterres said he was inspired by the student climate strikers to call a special summit in September to deal with what he called “the climate emergency.”

“My generation has failed to respond properly to the dramatic challenge of climate change,” Guterres wrote in an opinion piece in The Guardian. “This is deeply felt by young people. No wonder they are angry.”

Hundreds of students and others milled in front of the U.S. Capitol, holding signs saying “I Want You To Panic,” ”Time is Ticking” and “It’s Our Future.”

“Borders, languages and religions do not separate us,” eight-year-old Havana Chapman-Edwards, who calls herself the tiny diplomat, said at the Capitol. “Today we are telling the truth and we do not take no for an answer.”

Chapman-Edwards and other speakers in Washington spoke while standing behind a banner that read “We don’t want to die.”

Danish Prime Minister Lars Loekke Rasmussen has praised those who showed up at the climate change demonstration in Copenhagen, where thousands of students demanded more government action to fight global warming.

Loekke Rasmussen, who joined the protest, tweeted Friday “we must listen to the youth. Especially when they’re right: the climate must be one of our top priorities.”

“Hope all these bright young people will be back in school on Monday — we’ll need great scientists to help solve the climate issues in the future #fridaysforfuture,” he wrote in English.

Elsewhere, some 30,000 demonstrators gathered in Brussels and thousands more braved wind and rain in cities across Belgium to demand more action against global warming. Some grandparents joined the protesters, who carried huge banners with messages like “Running out of slogans … Do something.”

About 50 students have protested in South Africa’s capital, Pretoria, chanting “There’s No Planet B.” One protester held a sign reading “You’ll Miss The Rains Down in Africa.”

Experts say Africa, with its population of more than 1 billion people, is expected to be hardest hit by global warming even though it contributes least to the greenhouse gas emissions that cause it.

The rally was part of protests by students demanding more action against climate change in over 100 countries.

In Berlin, police said as many as 20,000 climate change protesters, most of them students, gathered in a downtown square, waving signs reading “March now or swim later” and “Climate Protection Report Card: F.”

They marched Friday through the German capital’s government quarter, stopping in front of Chancellor Angela Merkel’s office. The rally was part of protests by students demanding more action against climate change in over 100 countries.

Environmental groups and experts have criticized German government plans to continue using coal and natural gas for decades to come.

Vokler Quaschning, one of more than 23,000 German-speaking scientists to sign a letter of support this week for the students, said Germany should stop using all fossil fuels by 2040. This would give less-advanced nations a bit more time to wean themselves off coal, gas and oil while still meeting the Paris goal globally.

He says “this is going to require radical measures and there isn’t the slightest sign of that happening yet.”

Thousands of students are marching in rainy Warsaw and other Polish cities to demand a ban on burning coal, a major source of carbon dioxide.

The march Friday was part of protests by students around the world demanding more action against climate change in over 100 countries.

Some in Warsaw wore face masks as they carried banners that read “Today’s Air Smells Like the Planet’s Last Days” and “Make Love, Not CO2.”

Elsewhere in Europe, police in Vienna said about 10,000 students demonstrated in the Austrian capital, while in Switzerland a similar number protested in the western city of Lausanne. In Helsinki, 3,000 students rallied in front of Finland’s Parliament sporting signs such as: “Dinosaurs thought they had time too!”

Thousands of students also marched through Madrid and more than 50 other Spanish cities, for Spain is vulnerable to rising sea levels and rapid desertification.

“Now or Never” read the signs brandished by enthusiastic teenagers thronging cobblestoned streets around the domed Pantheon building, which rises above the Left Bank in Paris. Several thousand students gathered peacefully around the landmark.

Some of the students criticized President Emmanuel Macron, who sees himself as the guarantor of the Paris climate accord but is criticized by activists for being too business-friendly and not ambitious enough in efforts to reduce French greenhouse gas emissions.

Friday’s rallies by students around the world were one of the biggest international actions yet to demand more government action to fight climate change. Protests were underway or planned in more than 100 countries.

Friday’s rallies by students around the world were one of the biggest international actions yet to demand more government action to fight climate change. Protests were underway or planned in cities in more than 100 countries, including in cities as diverse as Hong Kong, Paris, Warsaw, Wellington, New Zealand and Oulu, Finland.

From the South Pacific to the edge of the Arctic Circle, students mobilized by word of mouth and social media are skipping class to protest what they believe are their governments’ failure to take tough action against global warming.

Since then, the weekly protests have snowballed from a handful of cities to hundreds, fueled by dramatic headlines about the impact of climate change during the students’ lifetime.

Friday’s rallies were one of the biggest international actions yet. Protests were underway or planned in cities in more than 100 countries, including Hong Kong; New Delhi; Wellington, New Zealand; and Oulu, Finland.

For more stories by The Associated Press on climate change, go to https://apnews.com/Climate 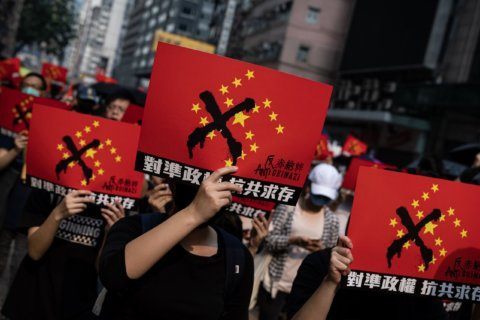 China says US action on Hong Kong ‘doomed to fail’

The Latest: India keeps some areas shut down, others to open