A roundup of some of the most popular but completely untrue stories and visuals of the week. None of these is legit, even though they were shared widely on social media. The Associated Press checked these out. Here are the real facts:

CLAIM: Photos purport to show wreckage from the Ethiopian Airlines crash that killed 157.

THE FACTS: Two photos of plane crashes, both showing wreckage of tail sections, are circulating on social media and being falsely identified as debris from the Boeing 737 Max 8 jet that crashed Sunday. One of the photos, taken by Reuters, shows the overturned tail section of a Hercules C-130 military transport plane that crashed in Medan, North Sumatra in Indonesia on June 30, 2015. Associated Press photos from the 2015 crash show a similar scene. The second photo, which belongs to Getty Images, shows the charred tail section of a plane with a wing pointing upward. It is from the April 11, 2018, crash of a military plane Boufarik, Algeria. The AP took a nearly identical photo at the scene of the 2018 crash.

CLAIM: Photo shows girls in Michigan wearing hijabs and displaying “Down with U.S.A.” written on their hands.

THE FACTS: The photo, circulating on social media with the caption “This is not the Middle-East where America is hated and Muslim terrorist (sic) are born. This is Michigan,” was taken during a 2013 demonstration in Iran. The European Pressphoto Agency, which owns the photo, told the AP that photographer Abedin Taherkenareh captured the image while covering a demonstration in Tehran marking the 34th anniversary of the Iran hostage crisis where Iranian students seized the U.S. Embassy, holding 52 Americans hostage for 444 days. The AP also covered the 2013 protest. AP archive photos show similar scenes. The post is one of many that has surfaced online targeting the growing Muslim community in Michigan, particularly in the city of Dearborn, which is home to one of the largest Arab-American populations in the U.S.

CLAIM: “Donald Trump takes off his hat at Mar-a-Lago forgetting he’s not wearing his toupee.”

THE FACTS: An altered video that shows President Donald Trump removing a red baseball cap and revealing that he is bald is circulating widely on social media. In the original video, Trump was joking with attendees of a Big Dog Ranch Rescue fundraising event at Mar-a-Lago when he removed his red cap, emblazoned with “USA,” to smooth back his hair. “Look my hair’s a mess,” he said to the group’s amusement. A Twitter user, who uses the handle @PaulLeeTicks — a play on the word politics — told the AP that he created the video, and his watermark appears on it. The user fills his feed with comedic memes and videos and refused to be identified. Photos taken by Palm Beach Daily News photographer Meghan McCarthy also show that the president’s hair was intact, if messy, at the event.

This is part of The Associated Press’ ongoing effort to fact-check misinformation that is shared widely online. 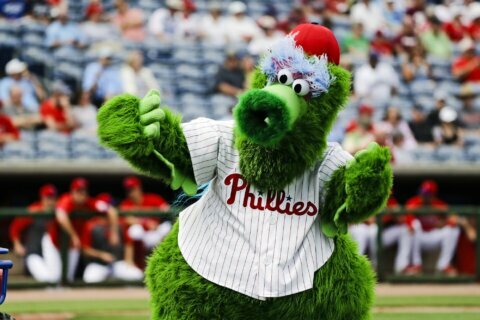