TOKYO (AP) — Mark Karpeles, who headed Mt. Gox, a Tokyo-based bitcoin exchange that went bankrupt after a massive hacking, was found guilty Friday of manipulating electronic data but cleared of embezzlement and breach of trust charges.

The Tokyo District Court handed down a prison sentence of two years and six months, suspended for four years, meaning Karpeles will not have to serve jail time.

Karpeles, a 33-year-old Frenchman, was arrested in August 2015, and suspected of taking money from his clients. He said he was innocent, arguing he did not pocket the money that got lost at his exchange.

Prosecutors had demanded 10 years in prison.

Karpeles, appearing in court in a dark suit, quietly sat listening to the verdict.

His case drew global attention, coming at a time when cryptocurrencies were still relatively new.

So did his nearly yearlong incarceration ahead of his trial.

Although the court ruled Karpeles had not embezzled money, it said he had manipulated data to harm his clients, betraying their trust and abusing his engineering skills.

It was not immediately clear if Karpeles would appeal. Although he was found guilty of some charges, he was acquitted of what legal experts would see as more serious wrongdoing. Acquittals are rare in Japanese courts, where the conviction rate is higher than 99 percent.

Karpeles’ chief lawyer Nobuyasu Ogata has argued the authorities were confused about how cryptocurrency exchanges worked and were trying to pin the blame for an massive cybercrime on Karpeles, who was actually a victim.

In his statement to the court in 2017, Karpeles said he “never once improperly used any funds” at Mt. Gox, or dishonestly manipulated data for profit. He apologized for Mt. Gox’s collapse, acknowledging that many customers had suffered, but he said his case had nothing to do with the hack or any effort to recover the stolen bitcoins.

The Mt. Gox case raised alarm over what had been a legal gray area.

The Japanese government since encouraged the use of cryptocurrencies, but set up a system requiring exchanges to be licensed to help protect consumers. The system is also meant to make Japan a global leader in the technology.

Bitcoin has been a legal form of payment in Japan since April 2017, and a handful of major retailers here already accept bitcoin payments.

The recurrence of cryptocurrency heists has dampened some of the initial enthusiasm, and no official numbers are available on estimated Japanese users. But many are thought to be dabbling in various cryptocurrencies, seeing them as an alternative for keeping their savings in banks at near-zero interest rates.

Karpeles, who is fluent in Japanese, exhibited a flair for technology and coding since a young age. He started working with bitcoin from its inception, when they were worth a fraction of their value today.

By 2014, Mt. Gox was among the biggest bitcoin exchanges in the world, dealing with what was the equivalent of millions of dollars of transactions a day. But it was plagued by hacks from the start.

Its bankruptcy proceedings have progressed to a civil rehabilitation procedure, as some users try to reclaim their money.

Bitcoin was started in 2008 by a person or a group called Satoshi Nakamoto, whose real identity is unknown. In theory, blockchain technology makes bitcoins secure. They can’t be forged, making them a great way to make cashless payments over the internet, across borders, especially in places without sophisticated banking systems or stable currencies.

In practice, they’ve been a disaster for some investors.

In an interview with The Associated Press last year, Karpeles warned about the risks of virtual money, likening its precariousness to a game of musical chairs, with about 10,000 people around each chair.

“As long as everyone is dancing, it’s fine, but if everyone wants to sit at the same time there won’t be enough chairs,” he said. 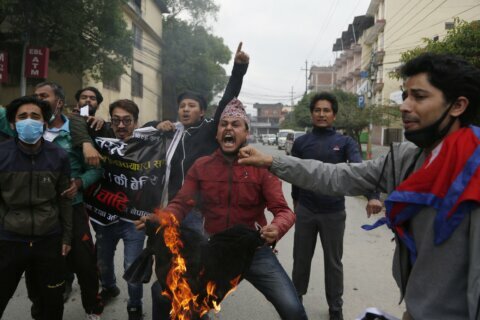