More than 2,000 U.S. and Philippine military personnel, along with a small contingent of Japanese forces, are holding annual combat exercises aimed at responding rapidly to crises and natural disasters and underscoring their commitment to keep the region “free and open.”

The 10-day drills, which include amphibious assault and live-fire exercises, opened at Subic Freeport, a former U.S. naval base northwest of Manila. They will also include humanitarian work in six northern Philippine provinces.

“These activities represent an increase in military capability and a commitment to a free and open Indo-Pacific region and demonstrate the ability to forward deploy forces in the event of a crisis or natural disaster,” the U.S. Embassy in Manila said.

About 100 members of Japan’s Ground Self-Defense Force will participate in drills using amphibious assault vehicles and will train alongside U.S. and Philippine forces in providing humanitarian aid and disaster-response work, the American embassy said.

Combat exercises between the Philippines and the U.S., its longtime treaty ally, have proceeded despite threats by President Rodrigo Duterte to halt them in anger over U.S. government criticism of widespread deaths under his crackdown on illegal drugs.

Despite new South China Sea tensions between Manila and Beijing, the new head of the Philippines armed forces says the chance of an armed conflict remains very low.

“We support the government’s strategy in resolving this conflict through peaceful and diplomatic means, so as to prevent the escalation of tension between our nations,” said Lt. Gen. Noel Clement said in comments to the Foreign Correspondents Association of the Philippines.

Clement, who was appointed military chief of staff by President Rodrigo Duterte last month, overseas a force that is considered one of the weakest in the region. Along with defending Philippines maritime interests from Chinese encroachment, troops are battling Muslim rebels in the far south and a longstanding Communist insurgency.

Earlier this month, the Philippines ordered a diplomatic protest against China after Chinese coast guard ships reportedly neared a Philippine-occupied shoal in the South China Sea.

Foreign Secretary Teodoro Locsin Jr., who was accompanying Philippine President Rodrigo Duterte on a visit to Russia, issued the normally confidential order on Twitter to officials at the Department of Foreign Affairs.

The Philippine military chief and other officials have reported new activities by Chinese coast guard vessels at Second Thomas Shoal, where Filipino marines keep watch aboard a long-grounded navy ship.

Vietnamese President Nguyen Phu Trong is calling on the ruling Communist Party to “prepare for possible opportunities and challenges” in the South China Sea.

Trong said it was time to take stock after three months of tensions with Beijing over Vietnamese-controlled Vanguard Reef that China also claims, according to Hong Kong’s South China Morning Post.

Though their last major standoff in the area was in 2014, a Chinese survey ship Haiyang Dizhi 8 began in July making passes through the area, a accompanied by heavily armed coast guard escorts.

Trong, in his role as general secretary of the country’s ruling Communist Party, called on it to “prepare for possible opportunities and challenges” in the disputed waters.

Last month, Foreign Minister Pham Binh Minh said at the U.N. General Assembly that “Vietnam has on many occasions voiced its concerns over the recent complicated developments in the South China Sea, including serious incidents that infringed upon Vietnam’s sovereignty.”

“Relevant states should exercise restraint and refrain from conducting unilateral acts, which might complicate or escalate tensions at sea, and settle disputes by peaceful means,” Pham said in remarks clearly directed at China but which didn’t mention the country by name.

The Latest: Germany sticks with original time between doses 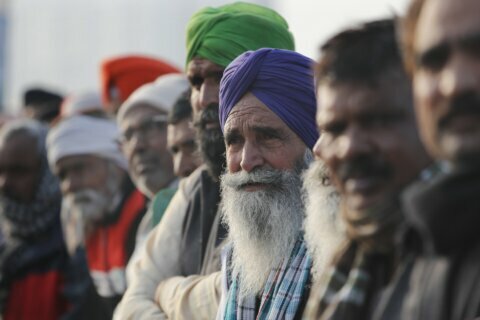