Review: ‘Slumberland’ aims for enchantment, but gets lost

It is a blockbuster children’s fantasy in the colorful over-the-top vein of “Alice in Wonderland” with a horned Jason Momoa doing a cross between Jack Sparrow and Beetlejuice on an adventure with a soft-spoken 11-year-old girl, plus Kyle Chandler sporting a beard and a fisherman sweater to rival Chris Evans’ “Knives Out” look. It is earnest and fanciful and they seem to have had a massive visual effects budget to play with. So why isn’t “Slumberland” more fun?

Yes, this is a story that’s ultimately about grief — Chandler’s sweater-wearing, lighthouse managing, storytelling single father to Marlow Barkley’s Nemo is lost at sea early on and we spend the rest of the film following her as she tries to find a way to be reunited with him. But “Slumberland” is also a treasure hunt through dreams, where nightmares and dream cops are chasing her and Momoa’s Flip, an outlaw in a shiny jacquard suit who has forgotten who is in the real world, describes himself as a “troubling mix of father-figure and pent-up masculinity.”

“Slumberland” is the creation of Francis Lawrence, director of the last three “Hunger Games” movies, working with a story written by Michael Handelman and David Guion (“Night at the Museum: Secret of the Tomb”). This is a team with quite a bit of experience making big, glossy, entertaining spectacles for a pre-teen set. So it is a bit of a head-scratcher that “Slumberland” comes up short in its capacity to awe.

Nemo, after losing her father, is placed in the custody of his estranged brother Phillip (Chris O’Dowd, doing his best baffled hangdog), who rips her out of her postcard world in the lighthouse and takes her to the big city, where he lives in a sleek high-rise apartment that looks like it’s out of a showroom. He’s made big bucks in doorknob sales, apparently, which will of course play into the plot at some point.

It’s there that Nemo, when she falls asleep, is transported to Slumberland, meets Flip, who she recognizes from her father’s bedtime stories, and they conspire to find a magic pearl that will grant them both their wish. In order to do so, they’ll have to dream-hop through other people’s subconscious, if you were wondering where the “Inception” nod was.

But the dreamers here are just world constructors and their dreams are strange brew of dazzling and uninspired, like the woman doing salsa in a butterfly ballroom with butterfly dancers. Was that just a visual they thought would be cool? Because neither she nor the butterflies have much to do with anything beyond just a room to pass through while trying to evade Dream Cop Agent Green (Weruche Opia). In this way “Slumberland’s” big, flashy set pieces feel more like random virtual reality worlds that aren’t quite fully developed than an actual human dream. At the very least, they could have had more of a “Ready Player One” escape room element to them to heighten the tension and stakes.

“Slumberland” is not a terrible movie and it may very well spark your imagination or tug at your heartstrings (though sweet kids crying over dead parents is about as low-hanging as the fruit can get). But it also could have been so much more had it not gotten so bogged down in its own superfluous flash, which, by the end, just feels exhausting. 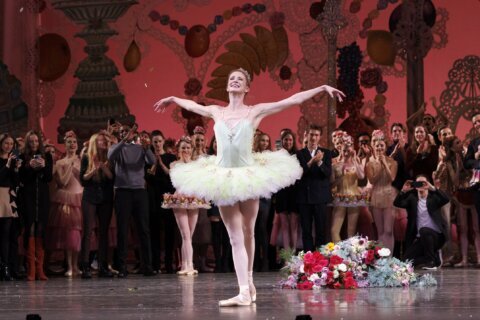