Marilyn Monroe’s on-screen costumes are almost as iconic as her. Think of the hot pink strapless gown she wore to sing “Diamonds Are a Girl’s Best Friend.” Or the white halter cocktail dress that billowed up over a subway grate in “The Seven Year Itch.”

They have been recreated, reimagined and referenced many, many times, from big budget movies and music videos down to cheap costume stores and everything in between. The white subway dress she wore for the scene fetched $4.6 million at auction in 2011 and several years later the “touring” replica went for $120,000. Suffice it to say, “ Blonde ” costume designer Jennifer Johnson felt an enormous amount of pressure to get the dresses that we all know so well right for the Netflix film, streaming Wednesday.

While “Blonde” may be a fictionalized version of Monroe’s story, the costumes are ripped from reality. The vast majority of the frocks star Ana de Armas wears in the film as Monroe are recreations that Johnson and her team had to make without the actual reference garment on hand. In fact, the only Monroe item she was able to study in real life, a jacket from the film “Niagara” that is kept at Western Costume in Los Angeles, did not make the cut.

Instead, Johnson relied on the films themselves, photos in director Andrew Dominik’s 750-page “bible” for the shoot, and a little booklet by William Travilla, the longtime studio costume designer who was responsible for many of Monroe’s most famous film looks.

“We couldn’t obviously access the same fabrics, but it was really important to uphold the quality of construction to those original dresses so they didn’t feel like a cheap simulation or like a costume,” Johnson said.

She learned in Travilla’s book that when the pink “Gentlemen Prefer Blondes” dress wasn’t moving correctly as Monroe descended down the stairs singing “Diamonds Are a Girl’s Best Friend,” he, in a last-minute panic, procured some green felt meant for a pool table from another department and lined the garment with it. While she didn’t resort to the pool table technique, she did empathize with Travilla’s woes when she ran into similar problems herself.

Headaches aside, she said, when the money is there, it’s “always easier to make it” then to find something vintage.

“It’s quite hard to find existing things,” she said. “Vintage clothing is going away. It’s literally evaporating from this planet.”

By far the most difficult dress to recreate, however, was the white pleated one immortalized in “The Seven Year Itch,” another Travilla creation. The pleating proved to be enormously complex, in part because there aren’t many places in the United States that specialize in that technique anymore, which requires custom molds.

“We had a lot of failures,” Johnson said. “It was incredible how much fabric it took to create the arc and the drama of that dress when it blows up with the subway grate… I think we went through about 50 yards of fabric because the pleating wasn’t right. It looked great, but the molds were not designed correctly for the pleating. There was a lot of research and development and waste going into that.”

But it was worth it in the end to see it in the film, where it’s almost a supporting character in a pivotal and chilling recreation of the memorable moment.

Monroe’s off-screen style was much more subdued and far from the sequins and glitziness of her movie looks. Johnson and Dominik decided she should have an off-duty uniform of sorts, consisting largely of Capri pants and turtleneck sweaters, some of which were vintage finds from Los Angeles costume houses.

“It was really important to me that that uniform project her desire to be taken seriously as an actor and as an artist,” Johnson said. “She was kind of emulating beatnik style or French style.”

Not everything is completely accurate, though. Naturalism was paramount for Johnson, including making sure that the outfits worked for both de Armas’s body and a contemporary viewing audience. One thing they nixed were the marbles Monroe famously sewed into her bra. That, she determined, would be distracting to modern eyes.

“I never wanted it to feel funny or costume-y,” Johnson said. “When I approach my designs, and even if that’s a recreation from something we all know, it was really important that Ana never feel like she was wearing a costume.

“Those dresses are so iconic, they could easily overtake the actor and become all about the costume. And I always wanted it to be complementary to Ana’s incredible performance.” 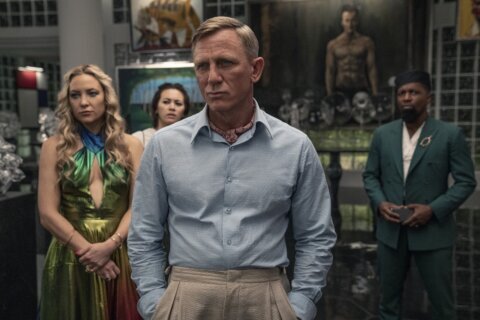 ‘I don’t dance’: Daniel Craig nonetheless has moves in ad