A touring, interactive version of “The Rocky Horror Picture Show” is hitting the road to celebrate the cult film's birthday with screenings, live shadow casts, the invitation to be inappropriate and one of its original stars — Barry Bostwick.
Listen now to WTOP News WTOP.com | Alexa | Google Home | WTOP App | 103.5 FM

A touring, interactive version of “The Rocky Horror Picture Show” is hitting the road to celebrate the cult film’s birthday with screenings, live shadow casts, the invitation to be inappropriate and one of its original stars — Barry Bostwick.

“It’s an excuse to go crazy, be rude, throw stuff, yell and be silly — who doesn’t want that?” asks Bostwick. “Everyone there is having fun, a communal experience. Especially now after the pandemic, we need to gather and blow off some steam.”

Released in 1975, the sci-fi, cross-dressing rock musical film became a cult favorite and entered the pop culture lexicon for its many iconic and memorable scenes, including the song “The Time Warp” which has been covered by handfuls of artists and the often quoted phrase, “Dammit, Janet!” Other things yelled are less PG-13.

It has morphed into an interactive event in which people throw rice during a wedding scene, place newspapers on their heads and squirt water during a rain storm scene, and toss dried toast during a dinner toast scene. People often come dressed in corsets, fishnets, maid costumes, butler costumes and heavy stains of eye shadow.

“It has endured because it was always organic,” said Bostwick. “The call-backs and throwing stuff was never introduced by the filmmakers or the studio. It was by fans, who added layer after layer and then that all got standardized.”

The story centers on the goody two-shoes Janet and Brad, a young couple with car trouble who stumble on an old castle filled with eccentric characters: cross-dressers, scientists and a maid, included. This leads to some interesting pairings and experimentations. The film made household names of Bostwick, who played Brad, Susan Sarandon as Janet and Tim Curry, the castle’s Dr. Frank-N-Furter.

The tour will play in stage theaters across the country, which will throw up a massive screen and show the movie while local actors dressed as the characters perform the show in front of the screen and the audience gets seriously weird. Before the show, there are costume contests and fans can see a traveling mini-museum of memorabilia from the film, including a feather boa worn by Curry and a sequined top worn by the character Columbia.

The tour kicks off Saturday in Florida’s Pompano Beach before hitting California, Idaho, Ohio, Michigan, Arizona, New York, Connecticut, New Jersey, Virginia, Vermont and North Carolina. Some of the traditional practices — like shooting squirt guns and tossing rice — have been lost along the way, but if you forget to bring other items, prop bags are available for sale.

Scott Stander, who produces the show as part of his portfolio of concerts, variety shows and celebrity evenings, said part of the appeal of “Rocky Horror” has been its invitation to audiences to cut loose.

“I think part of it is getting to be whatever they want to be. You could be red or blue and it doesn’t matter. You will get along — one of the few things you can get an audience in together and nobody talks about anything but having a great time,” he said.

“Where can you go dress in fishnet or be square and act like Brad and hear shout-outs from the audience and have toast flying or toilet paper and just be involved? It’s just so different. There’s nothing like it.”

Bostwick will be at each stop, meeting guests and introducing the film. He has had a very varied career since “Rocky Horror,” including roles on “Scrubs,” “Cougar Town” and “Spin City,” plus winning a Tony Award — but few projects have triggered as much sustained enthusiasm as playing Brad.

“I was at a convention last month and I looked out and saw 2,000 people and most of them were under 25. It gets passed down from one generation and I think becomes a rite of passage to adulthood,” he said.

The pandemic forced the annual tour to be held at drive-ins, but the new version is back to in-person gatherings, something Stander feels we’ve missed.

“I think right now we’re looking for anything fun and different to get out and have a good time and forget your troubles, don’t you think?” 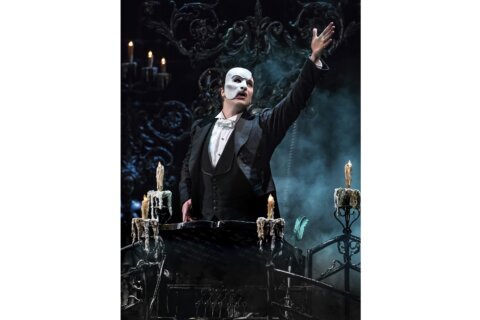