Tony Moments: A night for Broadway to reclaim its groove

NEW YORK (AP) — Surely many in the audience were thinking it, but “Company” director Marianne Elliott said it most directly at Sunday’s Tony awards: In the devastating two years since the pandemic hit, it “felt at times that live theater was endangered.”

The exuberant ceremony Sunday night was designed to answer that unthinkable possibility with an emphatic “No” — to make clear that whatever the ongoing difficulties, Broadway is back, with verve and creativity, and it is here to stay. It just needs even more people filling the seats.

But if the ceremony was meant to recapture the razzle-dazzle of Broadway seasons past, marking the 75th anniversary of the Tonys with a dollop of nostalgia, it was also a celebration of groundbreaking work by a hugely diverse group of artists. The marquee award, best new musical, went to the highly innovative “A Strange Loop,” Michael R. Jackson’s 2020 Pulitzer Prize winner about a Black gay man writing a show about a Black gay man. “A Strange Loop” beat out crowd-pleasing fare like “Six: The Musical,” a pop reimagining of the six wives of Henry VIII, and “MJ,” about the King of Pop, Michael Jackson.

The night was hosted by a supremely confident and versatile (and recent Oscar winner) Ariana DeBose, who declared at the beginning that Broadway had gotten its groove back. But a quick glance around the room at Radio City Music Hall showed that challenges remain. While nominees and guests in the orchestra were maskless (having submitted COVID-19 tests), those in the balconies were all masked — including a group of COVID-19 safety managers being honored — just as Broadway theater audiences are still required to be. The somewhat jarring juxtaposition showed this is still by far not a “normal” Broadway season.

UNDERSTUDIES GET SOME LOVE

With Broadway casts sometimes decimated by virus cases, hardworking understudies and swings have been recognized all season as saviors, and heralded by stars like Hugh Jackman, who has praised them as “superheroes.” Host DeBose noted that she herself was an understudy early in her career, and some winners also made sure to pay respect: “I bow to you,” said “MJ” director and choreographer Christopher Wheeldon. Later in the show after a number from “Six,” DeBose made sure to mention that Mallory Maedke, the show’s dance captain and alternate, “was put into this number 12 hours ago,” drawing cheers from the crowd.

Broaching the subject of diversity and representation, DeBose hailed the fact that Broadway was becoming “more reflective of the community that adores it.” She noted the season was full of Black creative voices both on and offstage, and that two Broadway theaters were being renamed for the great Black performers James Earl Jones and Lena Horne. And she quipped that she sees the phrase “The Great White Way,” as Broadway has long been called, to be a nickname — “as opposed to a how-to guide.”

Jackson, cutting a striking figure with his hot pink coat over a tuxedo, explained how he took 18 years to complete “A Strange Loop,” which he wrote as he was feeling “unseen, unheard, misunderstood.” He added: “I just wanted to create a little bit of a life raft for myself as a Black gay man to get through the day.” And he noted that while representation is crucial, also crucial was doing one’s best possible work. “I’m all about representation but let’s make sure we are staying on our grind,” he said. “Never settle for anything less than the best you can do.” His cast seemed as overjoyed as he was; when they finished their Tony number, they jumped up and down wildly with joy.

NO TONYS, BUT THEY GOT TROMBONES

“The Music Man” revival is one of the biggest current hits on Broadway, regularly pulling in more than $3 million a week, in no small part due to beloved and charismatic leads Sutton Foster and Jackman. Despite six nominations, it failed to win any Tonys on Sunday. But the crowd seemed to love it when Jackman started crooning the famous “Seventy-Six Trombones” number with smiling young cast members marching through the audience and then Foster arriving to tap up a storm with her costar — two of the best triple threats in any Broadway season.

AWARD FOR MOST THANKED? DUH, MOM AND DAD

Everyone thanks Mom and their Dad at awards shows — well, almost everyone — but some are more specific than others. Jesse Tyler Ferguson, winning best featured actor in a play for “Take Me Out,” made sure to thank the ’rents for letting him find his dreams in the Big Apple. “Mom, Dad, thank you for letting me move to New York when I was 17 years old. I told you it would be OK!” said the “Modern Family” star. As for Gareth Owen, who won in sound design for “MJ,” he thanked his parents “for not pushing me too hard to get a proper job.”

Joaquina Kalukango, too, thanked “the best parents in the world” when she won the Tony for best actress in a musical for her towering performance in “Paradise Square,” a show about Irish immigrants and Black Americans in Civil War-era New York. But she also thanked her sister for designing her glistening dress with a lime green train. Kalukango won the rare double standing ovation — first for her scorching performance of the musical’s “Let It Burn,” and then for her speech.

It was a huge moment for Myles Frost, winning best actor in a musical for his Broadway debut role as Michael Jackson in “MJ.” He chose to spotlight his mother for her teaching-by-showing approach. “Without you there would be no me,” said Frost, 22, whose dancing is a standout in the show. “You showed me what a strong Black woman is, and what it means to raise a strong Black man.” Frost became the youngest solo winner in the category, beating out Jaquel Spivey, 23, of “A Strange Loop,” not to mention Billy Crystal, Jackman and Rob McClure.

It was a night to mourn revered composer Stephen Sondheim, who died in November at age 91, and his influence was nowhere more apparent than in the five wins for the gender-bending revival of his “Company.” Elliot, who as director changed the commitment-phobe male role to a female one, made Tony history by becoming the only woman to win three Tonys for directing. She dedicated her award to everyone fighting to keep theaters open. The beloved Patti LuPone won best featured actress, thanking COVID-19 safety officers among many others in her acceptance speech, and Matt Doyle won for best featured actor.

A moving tribute to Sondheim was introduced by an emotional Lin-Manuel Miranda, who described the generosity of the late composer in writing letters to countless admirers, especially young writers hoping to learn from him, as Miranda once was. The floor then went to Bernadette Peters, one of the most renowned interpreters of Sondheim’s songs, who performed the moving “Children Will Listen” from “Into the Woods,” his mashup of fairytales. “Careful the things you say,” the song goes. “Children will listen.”

At Radio City and beyond, they were listening, and not just the children. 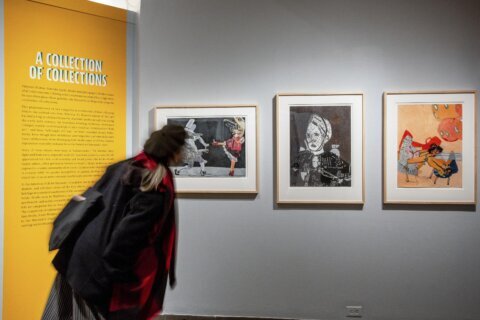