Images of intricate hearts made from vibrant sea glass are flowing back to schools and hospitals that have been hard hit by COVID-19 during the pandemic.
Listen now to WTOP News WTOP.com | Alexa | Google Home | WTOP App | 103.5 FM
(1/3) 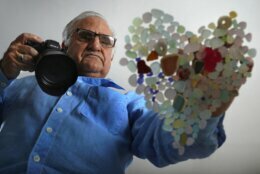 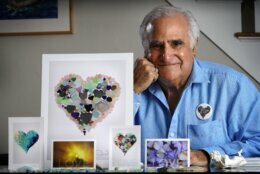 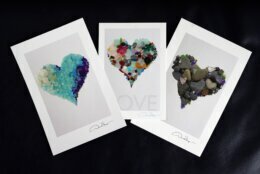 FALMOUTH, Maine (AP) — Donald Verger has been putting heart into his art during the pandemic.

And images of those intricate hearts made from vibrant sea glass are flowing back to schools and hospitals that have been hard hit by COVID-19 during the pandemic.

Across the country, many artists find themselves struggling during the pandemic, but they’re also finding ways to give back during a health crisis that has claimed more than 465,000 lives in the United States.

Verger’s efforts represent his small but colorful contribution to the effort to bring people a smile, or maybe a moment of calm and peace, amid the isolation of the pandemic.

He’s sent about 25,000 postcards of his hearts and landscape photography to schools and hospitals. He delivers them at 1,000 or 2,500 at a time. Employers and teachers give them to staff, students and patients.

“It seems like a great privilege to do something that supports happiness and some sense of hope,” said Verger, whose studio is in Falmouth, Maine.

In Boston, Shriners Hospital Administrator Eileen Skinner was handing out cards with hearts with the word LOVE to more than 400 workers ahead of Valentine’s Day.

“You have to be in a health care organization to understand the COVID fatigue,” Skinner said. “It’s just encouraging to the staff that somebody is thinking of them.”

As a photographer, he’s renowned for his stunning images of landscapes and lighthouses in New England. His best known photo is “Dawn of Peace,” which depicts sea smoke greeting the sunrise on a subzero morning on Thompson Lake in Otisfield, Maine.

He merged his photography with colorful sea glass that he began collecting on the coast of California. He began arranging the sea glass into images reminiscent of a Monet or Renoir painting.

His first donations came about after a brush with a tornado in Missouri while photographing the dramatic storms in 2011. The storm chasers became the ones being chased by a massive tornado that left the town of Joplin, Missouri. More than 150 people were killed.

After returning to Maine, he put some of his images meant to soothe and to calm onto postcards with a message and the name Joplin. All told, he sent about 25,000 of them to the Red Cross, schools and other organizations.

During the pandemic, he’s sent postcards to schools and hospitals. He recently donated to Northern Light Mercy Hospital in Portland and other facilities, in addition to Boston Shriners Hospital for Children.

Skinner and Verger first met in Maine, when he donated framed photos to be used at Mercy Hospital when she was CEO.

“Donald is a warm and generous person,” she said. “He shares what he does best.”