NEW YORK (AP) — Ann Reinking, the Tony Award-winning choreographer, actress and Bob Fosse collaborator who helped spread a cool, muscular hybrid of jazz and burlesque movement to Broadway and beyond, has died. She was 71.

Reinking died Saturday while visiting family in Seattle, said her manager, Lee Gross. No cause of death was disclosed.

Tributes poured in from the Broadway community, including from Tony Yazbeck, who called her “an absolute inspiration” and Leslie Odom, Jr., who thanked Reinking for being a mentor: “She honored the calling for real. RIP to a legend.” Bernadette Peters took to Twitter to say her heart was broken and Billy Eichner said she was “one of the most mesmerizing people I’ve ever seen on stage. A singular genius. RIP.”

Trained as a ballet dancer, Reinking was known for her bold style of dance epitomized by her work in the revival of the Kander and Ebb musical “Chicago,” complete with net stockings, chair dancing and plenty of pelvic thrusts.

Reinking co-starred as Roxie Hart along with Bebe Neuwirth’s Velma, and created the choreography “in the style of Bob Fosse,” the show’s original director and choreographer who died in 1987. She and Fosse worked together for 15 years and she was also his lover for several of them.

“I’m beyond words to hear of the sudden and untimely passing of my dear friend Ann Reinking. The world has lost such a beautiful soul and talent,” said Chita Rivera. “I loved sharing the stage with her whenever we could. Her spirit and razzle-dazzle will be with me forever.”

Reinking’s work on “Chicago” earned her a 1997 Tony, Drama Desk and Outer Critics Circle awards. Reinking replicated its choreography in productions throughout the world — England, Australia, Austria, Sweden, the Netherlands and elsewhere. She was portrayed by Margaret Qualley in the recent FX series “Fosse/Verdon.”

The musical’s revival was first done in a concert version at City Center’s “Encores” series in 1996 and then moved to Broadway, where in 2011 it became the second longest-running show in Broadway history.

“You know how you hear sometimes a woman goes into labor and 10 minutes later she’s got this beautiful baby? You couldn’t believe that it was materializing in such a beautiful way,” she told The Associated Press in 2011 about the early days of the revival.

In 1998, she co-directed “Fosse,” a salute to the man who had the largest influence, both professionally and personally, on her life. He once called her “one of the finest dancers in the jazz-modern idiom.”

Her movie credits include “Annie” (1982), “Movie, Movie” (1978) and the documentary “Mad Hot Ballroom” (2005), which portrayed Reinking as a ballroom-dance competition judge for New York City kids.

Reinking’s career began in Seattle, where she grew up. In the beginning, she wanted to be a ballet dancer, “like all girls,” she said. As a student, she won a scholarship in San Francisco with the Joffrey Ballet, but at many of the students’ after-hours improvisations, she would just sing and not dance.

Robert Joffrey said that with her outgoing personality and other abilities, she should pursue musical theater. “I waited tables to save up enough money to get here,” she said of New York City, where she arrived with a round-trip ticket back to Seattle and $500. She didn’t need the return trip.

“You wouldn’t get into this if you had a guarantee. People who get into this have a certain sense of the high stakes,” she said. “You need the break and when you get it, you’d better be ready for it.”

Reinking’s break was strung out over several shows. She was in the ensemble for Broadway’s “Coco,” which starred Katharine Hepburn as Coco Chanel, in 1969, and was in the chorus of “Pippin” in 1972, picked by its director and choreographer, Fosse. The ensemble was so small — there were only eight — that the dancers were really seen.

Choreographer Pat Birch was one who noticed, and in 1974 put her in “Over Here,” a World War II musical starring two of the three Andrews Sisters and featuring another unknown, John Travolta.

It led to a starring role in “Goodtime Charley,” a musical about Joan of Arc opposite Joel Grey. The musical was not a success, but it did make theatergoers look at Reinking as a principal performer and not just a member of the chorus.

Her other big break, she said, was in “Dancin’” in 1978, “because I realized you had to be in an original part and that show has to be a hit.” The music-and-dance revue directed and choreographed by Fosse was, running more than three years and earned her a 1978 Tony nomination.

But it was her work on the revival of “Chicago” where Reinking basked in the most attention. The original, a dark indictment of celebrity and hucksterism, opened in the summer of 1975 and ran for about 900 performances. Though not in the opening night cast, Reinking eventually slipped into the role of Roxie Hart, taking over the part from Gwen Verdon, Fosse’s third wife and dancing alter ego. In the 1996 revival, which is still on Broadway, Reinking kept the part of Hart opposite Gray and Neuwirth.

Lin-Manuel Miranda was among those praising her talent. “A singular talent has left us,” he wrote on Twitter. Jason Alexander added: “She was a pure joy — fun and funny and endlessly kind and talented. Heaven’s chorus line just got a star.”

Reinking also gained experience — and stayed in shape — by replacing stars in hit shows: Donna McKechnie in “A Chorus Line”; Gwen Verdon in Fosse’s original “Chicago”; and Debbie Allen in the 1986 revival of “Sweet Charity.”

And she embarked on an eclectic film career — from playing Roy Scheider’s lover in Fosse’s 1979 semi-autobiographical film “All That Jazz,” to the screen version of “Annie” to Blake Edwards’ “Micki and Maude.”

She also created dances for a revival of “Pal Joey” at Chicago’s Goodman Theater and a musical about first lady Eleanor Roosevelt called “Eleanor.” She was on the national tour of “Bye Bye Birdie” opposite Tommy Tune.

After “Eleanor,” offers to choreograph “kept falling in my lap,” Reinking said. She created dances for a pre-Encores “Chicago” in Long Beach, California, with Neuwirth and Juliet Prowse.

In one of the more cringe-worthy moments in her career, Reinking was asked to sing and perform the Oscar nominated song “Against All Odds” by Phil Collins at the 1985 telecast. Reinking lip-synched as she danced a bombastic, cheesy rendition marred by fog.

In recent years, she choreographed “The Look of Love” on Broadway and the Roger Rees-directed off-Broadway “Here Lies Jenny” (2004), starring Neuwirth. In 2011, she helped choreograph “An Evening with Patti LuPone and Mandy Patinkin” on Broadway.

Reinking also produced a documentary called “In My Hands,” about working with children of Marfan’s Syndrome, a rare genetic disorder of the connective tissues that often leaves its victims with limbs that are disproportionately long. She also produced the film “Two Worlds, One Planet,” about “high-functioning” autism.

Reinking’s first three marriages ended in divorce. Since 1994, she had been married to Peter Talbert. She also is survived by a son, Christopher, who has been diagnosed with Marfan syndrome and autism.

“If there is a heaven, I think Bob can look down and be satisfied. He really did have an exponential effect on the next generation of choreographers and dancers,” Reinking once said.

“He demanded the best from you and you wanted to give it. So you got better. All great directors — however, they do it — make you want to be good. I hope I do it. It’s like being a parent, a psychiatrist, a disciplinarian and a friend. You really have to know when to hold them and when to show them.” 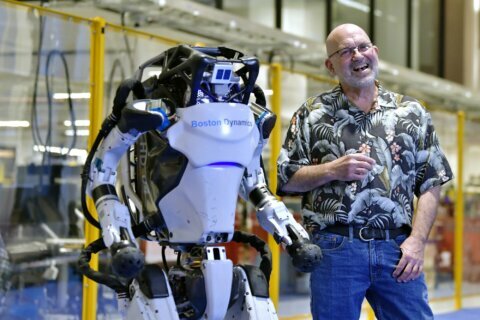