Built in 1892 in the East Village, Middle Collegiate is home to the oldest congregation of the Collegiate Churches of New York, which date to the settlement of Manhattan Island by Dutch colonists in the 1620s.
Listen now to WTOP News WTOP.com | Alexa | Google Home | WTOP App | 103.5 FM
(1/5) 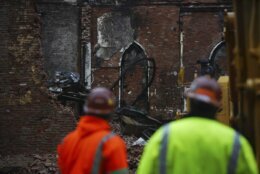 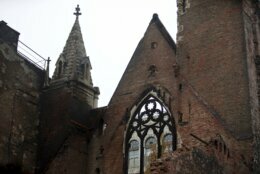 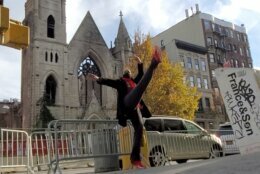 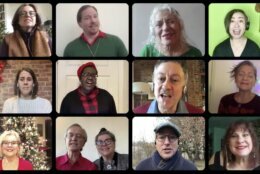 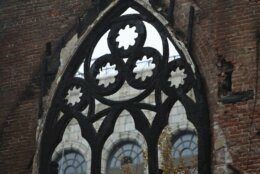 NEW YORK (AP) — At Christmases past, parishioners at Middle Collegiate in New York City rejoiced over gospel hymns, carols and soul tunes played on a Steinway piano that is now only metal and ashes after the historic church was destroyed this month by fire.

“Our brass doors are warped, our glass is shattered, our beams have fallen down,” said the Rev. Jacqui Lewis, the church’s senior minister. “The sanctuary is gutted. We are gutted.”

It seemed a tragic coda to an already-difficult year in which the congregation has met only virtually for nine months due to the pandemic. But amid the grief, Lewis asked parishioners to “worship God with joy” when they observed the fourth Sunday of Advent last weekend.

And they did — remotely, still, for safety reasons. Kids and teens sang carols in front of Christmas trees at home, parents lit candles and smiling families wished each other season’s greetings, all reinforcing Lewis’ and congregants’ conviction that the church is more than the beloved stone building where they formerly gathered.

“There’s something about people connecting to this tragedy in this time of Advent and Hanukkah,” Lewis said. “Finding the light in the darkness.”

Built in 1892 in the East Village, Middle Collegiate is home to the oldest congregation of the Collegiate Churches of New York, which date to the settlement of Manhattan Island by Dutch colonists in the 1620s. Middle Collegiate had previously occupied two other locations in Manhattan beginning in 1729.

Its belfry houses New York’s Liberty Bell, which tolled to mark the birth of the country in 1776 and was later rung for inaugurations and deaths of presidents and in remembrance of the Sept. 11, 2001, terror attacks.

The Gothic Revival building went up in a blaze Dec. 5 after fire spread from a vacant building next door before dawn. Flames shot from the roof, destroying its Tiffany stained-glass windows and skylight dome.

The bell and the skeletal facade were the only parts of the structure to survive. So did two vinyl banners reading “Black Lives Matter” and “Just Love,” the church’s motto, something that Lewis found meaningful.

“That’s some kind of miracle that the fire does not torch your values,” she said days later in front of the church, smoky odor still lingering in the air. “So, we’re sad. We’re crushed. And we’re resilient.”

A week after the fire, gospel choir members Joy Lau and Kaede Helck returned to the charred facade to lead a group in song — “God Is Here,” and “God Put a Rainbow in the Sky” — as a demolition crew worked to clear the debris.

Lau said she and others moved as a community from grieving to remembering that the church is also its people, “the church is us.”

“And that feeling that we can rebuild,” she added. “Yes, the roof collapsed, and it also felt at the same time the floor collapsed below us. But together we can do it.”

Lewis said the church has good insurance but it’s nowhere close to what’s needed for rebuilding, and they need help. Donations for reconstruction have rolled in from around the world, about $500,000 to date.

Middle Collegiate has also welcomed 25 new parishioners since the fire, she said.

A multicultural congregation, the church espouses what it calls “on-your-feet worship and take-it-to-the-streets activism.” Members have provided meals to people with AIDS, worked on storm recovery, fought for environmental protection and demonstrated for the Black Lives Matter movement and for LGBTQ and women’s rights.

Even as the church burned, congregants Katrina Monzón and Claudia Slacik were thinking of their neighbors. After the flames reached a building that houses a shelter for women released from jail, they collected warm clothing, shoes and toiletries for the displaced women.

Monzón said she’ll miss the building, where a memorial service was held for her late father, and congregants will cherish memories of baptisms, weddings, plays and concerts. But she’s proud of serving outside its walls and knows the community will endure.

“Jacqui always preaches about revolutionary love and activism and social justice,” Monzón said, “all of these things that brought me into this church, which is: What you say in a sanctuary on a Sunday means very little if we don’t actually show that commitment to that kind of life.”

A day before the fire, dancer Adrienne Hurd recorded herself rehearsing an Advent performance inside Middle Collegiate. Sunday’s virtual services incorporated that video, perhaps the last images ever made of the 128-year-old church.

“No matter what the material thing is, what the brick-and-mortar thing is, that’s not Christmas,” Hurd said. “Christmas is your spirit, connecting with others and lifting them up. And I think that’s what Christmas will be this year.”