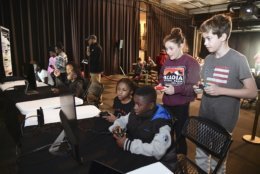 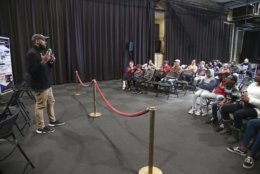 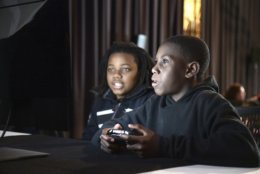 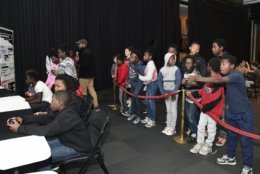 Evelyn, 13, puts up a valiant effort in the waning seconds of the match but Wyatt seals the victory.

He raises his arms above his head, Nintendo Switch controller in hand, and shouts, “I won!” before lowering his voice, turning to his competitors and saying, “GG, GG, everyone,” online gamer speak for “good game.”

Wyatt and Evelyn were two of about 30 students from Annapolis and Bates middle schools, who crowded around three computer monitors at Maryland Hall Saturday (Nov. 16) to participate in an EliteGamingLive esports tournament.

EliteGamingLive, or EGL, is an esports league tailored to K-12 students that combines the burgeoning field of esports with educational programming to help parents and educators introduce students to STEM fields, said the company’s founder Kerwin Rent.

Rent roamed the playing area, during the three-hour tournament operating as a referee and reminding players of the rules: no heckling, no disrespect, shake hands before and after a match. “You build rapport by respecting them,” he said.

One student asked Rent if he’s ever seen a fight during a tournament. “Never,” Rent told him. “Part of esports is learning how to lose.”

While some students played Smash, others went head to head in NBA2K. Anthony Moore, 14, and Tayquan Johnson, 14, faced off with Tayquan coming out on top. The pair shook hands and said they would join the team if their school had one.

Rent, who has a background in desktop engineering, built the EGL online learning module with the help of researchers, professors and other education experts. It lets students explore career paths — many of which are related to gaming — such as coding, audio engineering, virtual and augmented reality, and others. The results of those lessons can be viewed by parents or educators to help direct students toward skills or experiences they never considered before.

“We don’t tell kids that they should be a professional video gamer. … Going pro for gamers can be something completely different than that,” Rent said. “Every company that sells something is going to need people that engineer those experiences. These are all things that are really important in the world of gaming that people get paid a lot of money to do.”

Evelyn, who also competes in acroballet, said the tournament fed into her competitiveness, adding that she’s considering a STEM career path in high school.

“I want to learn how to code when I’m older,” she said.

Saturday’s tournament was an introduction to local students, Rent said, and he hopes it will encourage schools to establish teams.

The league is already up and running in schools in Indianapolis, where Rent is from, as well as Washington, D.C. and Virginia, with about 5,000 total players.

“You didn’t really think the video games you are playing, there are careers behind it, from the graphics, to game concepts, to coding,” Ajayi said. “There is a world of opportunity that I’m glad we get to expose these young people to.”

Rent founded the company in 2011, and soon after decided to focus on K-12 students by offering them the same competitive, social and educational opportunities that are offered to students who participate in traditional sports. He moved to Arlington, Va. two years ago to bring competitive esports, which have exploded in the last few years, to the region.

“I saw a disparity of support between traditional athletes, which I was, and gamers, which I was,” said Rent who played basketball and ran track, but also played Pokeman with a “secret group of friends” as he called them.

“EGL was created so that gamer kids could feel like sports kids,” he said.

As Wyatt battled his way through the Super Smash Bros. tournament bracket, stretching his shoulders and wiping sweat from his hands between matches, his mother, Kathleen Booth, stood a few feet away watching him play.

Wyatt has played several traditional sports, but none that he felt totally comfortable in, Booth said.

“This is the most excited I have ever seen him compete in something by far,” she said.

“I was like finally, I can channel this into something social…” Booth said, pausing a few seconds before adding, “IRL,” or in real life, the phrase often uses to differentiate between online experiences and those in the real world.

“For me to see him so excited about something, I think that’s awesome. I’m really hoping we can get it going.”

Wyatt said he was expecting the tournament to be only traditional sports games like Madden, FIFA and NBA2K.

“I thought I would get deleted,” Wyatt said, but once he heard Super Smash Bros. — one of his favorite games — was on the list, it changed his outlook, adding that he would join an Annapolis Middle esports team if given the chance.

For winning the Super Smash Bros. tournament, Wyatt received a medal and an official EGL jersey and Rent recorded him like any other post-game interview.

When asked how he thought he played, Wyatt responded like he had been winning esports championships for years.

“I feel pretty good about that. I feel like everything but the second match was OK,” he said. “Marth gave me a run for my money. My strategy was to be as aggressive as possible.”