Famous sons talk living in Annapolis, being at top of game

Aside from their shared first initial, gender and complexion, Ripken and Wallace have more in common than one may think. They both get grumpy when they're hungry. They both recently moved to Annapolis. And then there's their fathers and their fame.
(1/2) 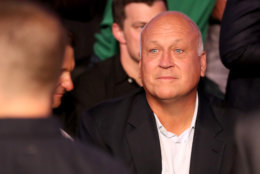 ANNAPOLIS, Md. (AP) — A TV news host and a baseball legend walk into a liberal arts college. This sounds like a joke, but there is no punchline.

Aside from their shared first initial, gender and complexion, Ripken and Wallace have more in common than one may think. They both get grumpy when they’re hungry. They both recently moved to Annapolis. And then there’s their fathers and their fame.

Known as the Iron Man for his record 2,632 consecutive game streak playing for the Baltimore Orioles, Ripken, 58, is now retired and living in Annapolis with his wife, Anne Arundel County Circuit Court Judge Laura Ripken.

Wallace, 71, is host of “Fox News Sunday” and was previously a moderator of “Meet the Press” on NBC. He revealed during their talk that he and his wife also recently moved to Annapolis.

Both men follow the footsteps of famous fathers, who build careers as household names before their sons continued their legacy.

Cal Ripken Sr. was a longtime coach and later manager for the Orioles before his son became the Iron Man. Before Chris Wallace appeared on screen, his father Mike Wallace built a career as a CBS 60 Minutes reporter.

This is one of the first things they talked about.

Ripken broached the conversation asking for advice, saying he worries about his son who also chose to go into baseball. Ripken recalled that as he’s coached his son and watched him play, he’s heard people remark “He’s not that good” or “Let’s see if he can hit like his old man.”

“It’s a problem but it’s a nice problem,” Wallace said.

“My father was a superstar. Sometimes people call you Mike instead of Chris. At one point I told myself, you know what, you’re probably not going to be Mike Wallace but neither is anybody else. And I was OK with it. Since my father died, I feel like I am the protector of his legacy and the flame. Occasionally, people will say ‘Mike’ and I’ll be thrilled because it means people still remember him.”

The two also talked about how their fathers gave them their work ethic. Wallace recalled his father waking him up early to watch an interview he had done with Malcolm X.

Ripken recalled his father pushing him to be the best while trying to make end’s meet. His father worked for a drug store, drove a lumber truck and did beverage delivery while also coaching his sons. Ripken said his father taught him how to hand cut his own baseball field to practice on with an old lawnmower that a neighbor threw away.

“People look at me like I had this secret. I ask myself where did I get my work ethic? Did he tell me to do this? It wasn’t his words. It was his actions,” Ripken said. “He was a doer. I tell my kids, ‘you have the power in your own hands.’ Don’t sit around and talk about it. It’s OK to strategize, but at some point, you just gotta jump in and do it. The influence that my parents had was they were doers. They didn’t sit around and wonder about doing something, they just did it.”

As one could guess, the baseball legend drew more attention than the journalist. The direction of the conversation often turned toward baseball and Cal’s career and when it came time, most audience questions were tailored toward just Cal, if not for both men.

One of those audience questions prompted him to take a stance on kneeling for the national anthem in the NFL.

“What’s interesting to me is, I wouldn’t express myself that way. I wouldn’t understand how and why. I don’t try to sit and judge either,” Ripken said. “It was hard for me to really understand all of that and so I didn’t spend a whole lot of time thinking about it. I wouldn’t do it to try to make a point, so that’s how I looked at it.”

Wallace did get a chance to talk about his accomplishments. He reflected on the home runs and world series moments of his career — interviewing Mother Teresa and moderating the last presidential debate between President Donald Trump and Hillary Clinton.

While audience members mostly asked Cal about the past, they turned to Wallace for bigger political questions: Will there always be two major political parties? (probably, yes, he said.) What is it like being a reporter during Trump’s presidency? (Chaotic.)

Wallace ended the night warning reporters not to be antagonists even when the other side isn’t always fair, hinting at White House reporters like Jim Acosta and Brian Karem.

“We can’t be players in the field. Our job is to be the umpire,” Wallace said. “When we get mixed up in the action, we weaken our position and strengthen our critics because it does seem like we have an ax to grind when our only job should be to report the truth.”

Police: 2 separate drownings in Annapolis believed to be accidental