Wendi Winters, one of the victims from the Capital Gazette shooting, was memorialized in a service on Saturday at the Maryland Hall for the Creative Arts in Annapolis, Maryland.
Listen now to WTOP News WTOP.com | Alexa | Google Home | WTOP App | 103.5 FM
(1/6) 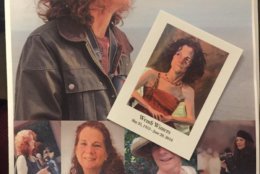 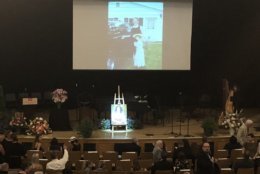 WASHINGTON — Wendi Winters, one of the victims from the Capital Gazette shooting, was memorialized in a service on Saturday at the Maryland Hall for the Creative Arts in Annapolis, Maryland.

Winters — a special publications editor at the paper — was killed on June 28, when a shooter targeted the Annapolis newsroom and killed five people.

There was only standing room at the service, where many came to pay their respects.

Reverend John Crestwell of the Unitarian Universalist Church of Annapolis urged the congregation to fight for change in the wake of Winters’ death.

“In this culture of mass shootings and racism … we must maintain our civility and our humanity,” Crestwell said. “Let us collectively take this tragedy as a wake-up call to do something.”

Winters, a mother of four, was honored by her children at the memorial.

Her son Phoenix Geimer requested in a Facebook post that in lieu of flowers, well-wishers make a donation to the Girl Scouts of America, the American Civil Liberties Union, Planned Parenthood or the American Red Cross.

Her daughter Montana Geimer sang a hymn at the service in honor of her mother.

Steve Gunn, the former editor of the Capital Gazette, described her as the best hire ever made by a newspaper who brought humanity to the publication every day.

Annapolis Mayor Gavin Buckley says she was seen so frequently around town, he thought the Capital Gazette had cloned her, because he couldn’t understand how one person could be in so many places.

Representatives of the Girls Scouts and Red Cross spoke of contributions Winters made to help people.

WTOP’s Melissa Howell and The Associated Press contributed to this report.

Terik King is an Associate Producer for WTOP. New to the news industry, before joining WTOP he held roles producing podcasts, unscripted television and content for MTV, the NFL and independent documentary production companies. Wife of Capital Gazette victim remembers his dedication to journalism