The Hedingham community had planned a fall festival, but gathered late Saturday afternoon instead for a vigil to remember those lost. A memorial adorned with flowers displayed photos of the five who were killed.
Listen now to WTOP News WTOP.com | Alexa | Google Home | WTOP App | 103.5 FM
(1/3) 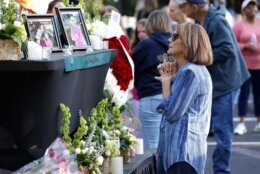 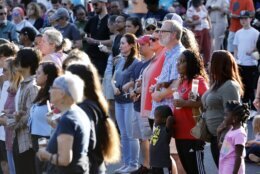 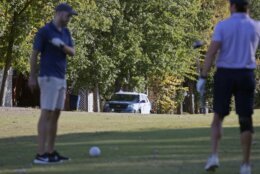 RALEIGH, N.C. (AP) — For Hedingham resident Marvin Judd, Nicole Connors and her beloved wire-haired dog, Sami, were as much a fixture of his routine as his daily drive to get an egg-and-cheese biscuit for breakfast.

“I’d see her walking that dog,” said Judd, 76, who’s lived in the densely developed neighborhood in Raleigh’s eastern outskirts for 20 years. “And I’d stop and talk to her on my way out and on my way back in.”

Judd would talk to the human resources specialist “about the Lord.” When she had microsurgery on her left shoulder, he offered the 52-year-old former Catholic schoolgirl spiritual comfort.

“I would tell her that God is going to heal her,” he said.

Connors recently told Judd she was almost finished with rehabilitation. And, then, she was gone — and the peace of Hedingham was shattered.

Police say a 15-year-old boy — dressed in camouflage and armed with a shotgun, according to 911 callers — turned the gently curving streets of Hedingham and the riverside greenway beyond into a killing zone. When the shooting was over Thursday, five people, including Connors, were dead.

Sami, short for Samantha, was found dead at Connors’ feet.

Although police have not identified the shooter, who was captured hours after the attacks and was hospitalized in critical condition for unknown reasons, neighbors say they believe he lived in Hedingham.

“It’s close to home,” said Joshua Phillips, who would often join Connors on walks with his pit bull, Buddy.

Hedingham is much like most American neighborhoods. You may not know the name of every person on your block, but people greet each other across driveways and can always find something to chat about.

But Phillips said Thursday’s slaughter was a “wake-up call.”

“Letting you know how real it is, where everything’s at right now. And, I mean, you can’t let your guard down, that’s for sure,” Phillips said Friday, as police finished processing two crime scenes just around the corner. “I mean, now you walk with a bit of caution. You don’t know what’s going on, who’s into what.”

The sprawling 18-hole course at Hedingham Golf Club serves as a grand gateway to the community along its southwest border. Now, the brick ledges lining its entrance — each read HEDINGHAM in gilded block letters — are piled high with flower bouquets and candles, the state flag flying at half-staff beside the makeshift memorial.

Volunteers passed out free meals across the street from the golf club entrance Friday evening while counselors and a golden retriever in a blue therapy dog vest greeted the grieving community.

With its golf course, lake and community swimming pool, the sprawling neighborhood of single-family and townhomes is a relatively affordable oasis in a booming real estate market. Banana trees, azaleas and rhododendron bushes adorn neat lawns, many dotted with pumpkins, ghosts and other Halloween decorations.

The community had planned a fall festival, but gathered late Saturday afternoon instead for a vigil to remember those lost. A memorial adorned with flowers displayed photos of the five who were killed. Their names and the names of two others who were wounded were read aloud. The crowd prayed for healing, lit candles and a group from a nearby church sang “Amazing Grace.”

Allison and Braden Greenawalt moved to Hedingham in 2019 shortly before the pandemic started. Even as COVID-19 forced people to stay closer to home, she found support from her new friends. It was that network of support she clung to on Thursday night.

The couple’s townhouse is just a few doors down from the home of Raleigh police Officer Gabriel Torres, one of those killed. As officers gathered evidence from Torres’ bullet-riddled car, Allison Greenawalt checked a community Facebook group for updates.

“It’s been a very warm community for people who support each other,” she said, tears rolling down her cheeks as blue and white police flashers lit the night. “We are a group of people who care about each other and stick together.”

One of the neighborhood’s treasures is the Neuse River Greenway, a bicycle and walking trail that snakes along behind the Greenawalts’ home. At least two of the victims were found there, according to 911 calls.

As she walked the greenway Friday afternoon, Sara Cutter, 31, said she sensed “a lingering sadness over Raleigh.”

Nature walks are a regular component of her self-care routine, she said.

“It’s one of the better places to feel like you’re in nature in the city,” Cutter, a salesperson, said as she walked the path with a friend. “It’s tucked away with trees in a lot of spots. Kind of makes you forget you’re in the city for a moment.”

That atmosphere of quietude was all the more important as she processes this tragedy in her hometown.

“I’ve seen some somber faces while I’ve been out walking today,” she said. “But it’s also been good to see people out. The community — that’s what will get us through.”

Despite the tragedy, Cutter said she intends to keep using the trail. But, she added, “I’ll probably never go alone again.”

Tracey Howard said he and Connors, his wife of five years, had always felt safe in Hedingham.

The couple, who met on Facebook, have been renting their two-story home for about four years. But they were planning on looking for a new home after the New Year.

“Something on the outskirts of Raleigh,” the truck driver said. “Something with more of a yard.”

After what happened, he knows he can’t stay in Hedingham.

Judd said Connors’ death leaves a gaping hole in the community, and his heart.

“She was a sweet person,” he said. “She had a good heart. And she was always kind and gentle to everybody she met. She didn’t meet strangers. Everybody was a friend.”

But Allison Greenawalt still finds beauty in the place.

“The calmness is a little broken,” she said. “And I know that while we might be a little shaken right now, we’ll grow back stronger than ever.”