Rosalynn Carter, the second-oldest U.S. first lady ever, turns 95 Thursday on a birthday that will be marked not just with cards and best wishes, but with butterflies.
Listen now to WTOP News WTOP.com | Alexa | Google Home | WTOP App | 103.5 FM
(1/2) 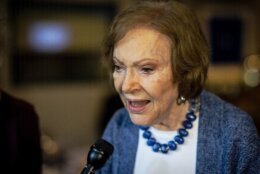 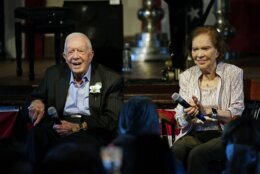 Rosalynn Carter, the second-oldest U.S. first lady ever, turns 95 Thursday on a birthday that will be marked not just with cards and best wishes, but with butterflies.

The wife of former President Jimmy Carter, 97, has a fascination with butterflies dating back to childhood, when she was entranced by the colorful insects flitting around her mother’s flowers in Plains, Georgia, longtime friend and neighbor Annette Wise said.

That interest led to the formation of the Rosalynn Carter Butterfly Trail, which was established in the southwest Georgia town after the former first lady grew concerned about the future of butterflies, which are crucial to the pollination of flowering plants.

“She read an article in 2013 about the decline in monarchs and decided she wanted to do something about it,” Wise said.

Wise said she helped Carter establish a garden featuring native milkweed, a prime habitat for monarch butterflies, at the home she shares with the former president, her husband of 76 years, but the public can’t visit it because of Secret Service security concerns. So Wise planted another garden nearby that could be open to visitors, and that helped lead to the butterfly trail, which includes 76 public and private gardens around rural Plains.

The butterfly trail will use Carter’s birthday to promote an annual statewide count of butterflies, the Great Georgia Pollinator Census, set for Friday and Saturday, Wise said.

Last Saturday, at an event held in honor of the former first lady’s birthday, Rosalynn and Jimmy Carter made one of their first public outings in awhile for the dedication of a new butterfly sculpture that’s part of the trail and is on property next door to where she grew up. The former first lady, using a walker, flipped a switch to illuminate the artwork at nightfall.

“They’re not getting out too much. COVID is a real concern, and their ages, too,” Wise said.

Rosalynn Carter has championed a number of causes, including conservation, but is perhaps best known as a pioneer for mental health advocacy. She worked for the passage of the Mental Health Systems Act of 1980 and has continued the advocacy work through The Carter Center in Atlanta.

Bess Truman, the wife of President Harry Truman, is the only first lady to have outlived Rosalynn Carter, according to The National First Ladies Library. Truman, who was first lady from 1943 until 1953, died in 1982 at the age of 97.

Jimmy Carter, who will turn 98 on Oct. 1, is the oldest living U.S. ex-president. Photos showed him seated in a wheelchair and smiling during the sculpture dedication.