BOISE, Idaho (AP) — Both pilots of a firefighting helicopter that crashed in Idaho have died, the U.S. Forest Service said Friday.

Mary Cernicek with the Salmon-Challis National Forest said Thomas Hayes, 41, of Post Falls, Idaho, and Jared Bird, 36, of Anchorage, Alaska, died from injuries they sustained when their CH-47D Series “Chinook” crashed in the Salmon River about 3:30 p.m. Thursday.

The pilots were employees of the Anchorage-based ROTAK Helicopter Services, which was contracted to help fight the Moose Fire burning about 21 miles (34 kilometers) north of Salmon.

Both pilots were “highly experienced” and military veterans, Cernicek said. Emergency crews responding to the crash were able to extricate the men and transport them to medical facilities but they did not survive, she said.

On its website, ROTAK said it confirmed the accident “with heavy hearts” and asked for prayers and privacy on behalf of the families involved.

“ROTAK Helicopter Services is working closely with all appropriate agencies and will issue a full statement as information is released,” the company wrote.

The Idaho crash comes less than a week after four first responders were killed in another helicopter crash in New Mexico. Authorities in New Mexico said the helicopter crew had wrapped up a firefighting mission and was heading home to Albuquerque when the helicopter came down at a high rate of speed, hitting the ground upright before toppling over. One of the four people killed in that crash managed to call 911 before succumbing to his injuries.

Idaho Gov. Brad Little ordered that flags be flown at half-staff in honor of Hayes and Bird. Little said the deaths were a tragedy that would be deeply felt by the families and the wildland firefighting community.

“Our brave firefighters face extremely challenging conditions head on to protect lives, property, and the land,” Little said in a press release. “Idahoans are praying for the loved ones and colleagues of these firefighters as we grieve this tremendous loss.”

Nearly 700 firefighters have been battling the Moose Fire in Idaho. The fire started on Sunday, and the National Interagency Fire Center said in an incident report Friday that nine helicopters were being used to support ground firefighting resources with water bucket drops.

The fire was burning on about 37 square miles (96 square kilometers) on Friday and threatening several structures, and fire managers said the fire was expected to increase as hot, dry conditions continued in the region. A “red flag” warning was issued in the area because wind gusts were expected to reach up to 35 mph (56 kph).

The helicopter wreckage was still in the Salmon River and National Transportation Safety Board investigators were en route to the scene, Cernicek said. That stretch of the river is popular with rafters and recreationists, and officials closed the area to recreational day trips. It remains open to people on multi-day river trips, Cernicek said. 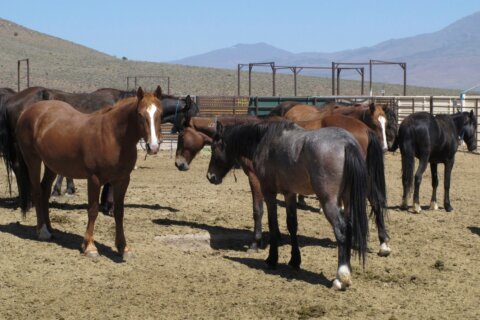