SAN FRANCISCO (AP) — A peregrine falcon whose longtime mate died this week amid the breeding season appears to have found a new partner to help her hatch two eggs.

Grinnell, one of a beloved pair of peregrine falcons who made their longtime home atop the bell tower at the University of California, Berkeley, was found dead Thursday. Less than 24 hours later, his partner Annie had mated with a new untagged male falcon, Cal Falcons, a group that monitors the birds, said on Twitter Friday.

“When a mated Peregrine dies during the breeding season, the most likely outcome of the nest is abandonment,” Cal Falcons tweeted. “In rare cases, a new mate can come in, establish a bond with the remaining individual, and adopt the chicks.”

While peregrine falcons typically mate for life, those who lose a partner will seek a replacement after a mate dies.

The new falcon also appeared interested in incubating Annie’s eggs and performed multiple courtship displays with Annie after spending the night in her gravel nest, the group said.

“Although these two eggs still might not make it, this is an encouraging development,” they said. “We will be keeping our eyes out for prey deliveries and incubation in particular, as those two behaviors will be an indication of a potentially successful nest.”

Grinnell was found dead on a street and was likely hit by a car, the group said. Grinnell and Annie had been nesting atop the university’s 307-foot-tall Campanile since late 2016 and produced 13 chicks.

Grinnell was attacked by other falcons last fall and spent nearly three weeks in a wildlife hospital recuperating, while other rivals courted Annie. But he returned and observers felt that the couple was bonding again.

A few hours before he died, Grinnell was seen defending the nest against another peregrine falcon. Cal Falcons said it’s possible that the new falcon is the one that Grinnell fought, though an injury on the bird’s left foot appears to be older.

In February, Annie vanished from her nest and was briefly presumed injured or dead before returning nearly a week later. Her disappearance made local headlines.

The falcon researchers said they had never seen a female vanish suddenly during peak breeding season and then suddenly return.

Peregrine falcons are considered the world’s fastest birds. They can reach 200 miles per hour (322 kilometers per hour) during a hunting dive known as a stoop. The American birds were declared endangered in 1970 because of ingesting prey that was poisoned by DDT and other pesticides. The chemical caused the falcons to produce thin-shelled eggs that couldn’t survive until hatching. However, recovery programs brought the bird back from potential extinction. 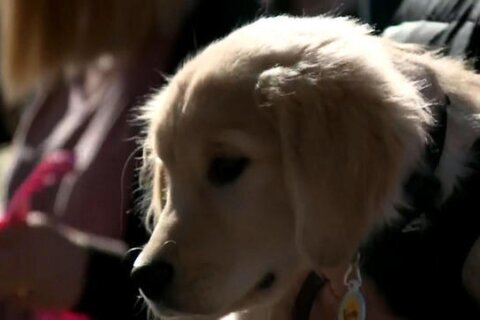