For 70 years a group of non-native monkeys has made their home next to a South Florida airport runway, delighting visitors and becoming local celebrities.
Listen now to WTOP News WTOP.com | Alexa | Google Home | WTOP App | 103.5 FM
(1/10) 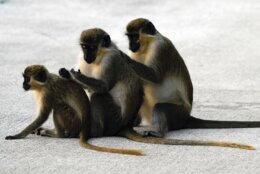 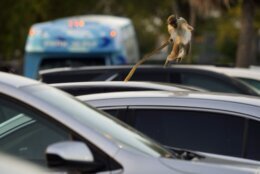 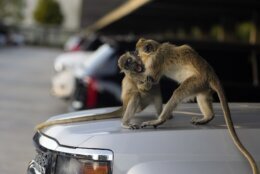 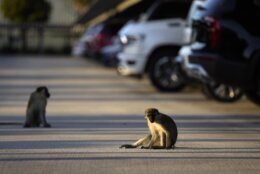 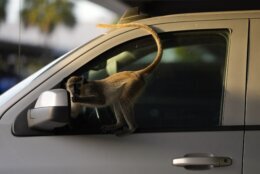 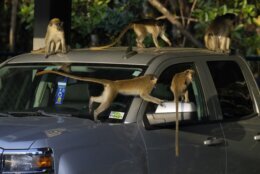 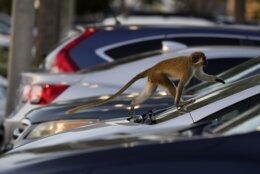 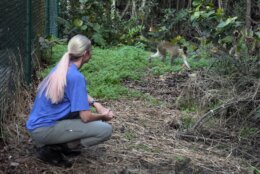 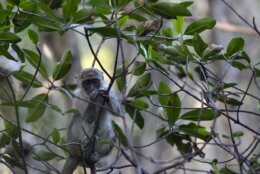 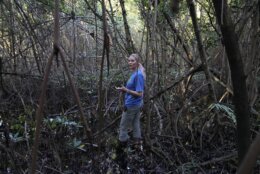 DANIA BEACH, Fla. (AP) — As departing jetliners roared overhead, an aging vervet monkey moped on a mangrove branch one recent afternoon in the woods he inhabits near a South Florida airport, his ego bruised.

Mikey, as he is called by his human observers, has long been the laid-back alpha male of a troop of monkeys ruling this tract of land, tucked off a busy runway at Fort Lauderdale-Hollywood International Airport. But this day he lost when challenged by a feisty youngster called Spike. Mikey fled screaming and was now sullenly staring at humans watching him from 15 feet (4 meters) away.

“Did you have a bad day?” asks Deborah “Missy” Williams, a Lynn University science professor who has been studying the troop and others nearby since 2014. She is also founder of the Dania Beach Vervet Project, which seeks to preserve this unique colony. “We will leave you alone so you can ponder.”

The United States has no native monkeys, but the smallish vervets have roamed Dania Beach since the late 1940s after a dozen brought from West Africa fled a now long-closed breeding facility and roadside zoo. Today, 40 descendants are broken into four troops living within 1,500 acres (600 hectares) around the airport. Florida also has a few colonies of escaped macaques and squirrel monkeys.

Florida wildlife officials often kill invasive species to protect native animals. But they tolerate the vervets, if they stay put. The monkeys are local celebrities, their travails detailed by TV and newspapers, and popular visitors with nearby workers, who feed them despite signs saying that’s illegal.

“My friends are like, ‘You have monkeys at your job?’” laughed airport parking lot attendant Harlen Caldera as she gave them raisins and nuts. Some ate from her hand, while others snatched what food she scattered.

Travelers are often surprised to see the monkeys. They squeal in delight and grab their cellphones, hoping for photos. Vervets are gray and black with a greenish tinge, helping them blend into the trees. Males typically grow to 2 feet (0.6 meters) and 15 pounds (6.8 kilograms); females reach 18 inches (0.5 meters) and 10 pounds (4.5 kilograms). They live about 20 years.

Caldera and her coworkers are protective of the monkeys, which have no fear of humans, making sure no one tries to catch or harm them. “You never know what people will do,” she said.

The entrance to the 16 acres (6.5 hectares) ruled by Mikey, the matriarch, Snow White, and their troop is at the parking lot’s rear, sealed by a locked fence. The mangrove trees are thick and the trail muddy — except where it’s covered in shallow water.

Williams began studying monkeys while doing doctoral work at Florida Atlantic University, and stayed on. As she and her guests waded deeper into the monkeys’ grounds one recent afternoon, the 16-member troop approached. The colony lives on spiders, ants, lizards, seeds and flowers — when not scrounging people food.

In Africa, vervets are eaten by leopards, eagles and snakes. But in Florida the dangers are outside the mangroves — mostly cars and trappers, who sell them as pets.

Because of their small population, Williams is concerned inbreeding will harm the monkeys’ health. In Africa, vervet males leave their birth troop when they reach sexual maturity at 5 years and join another. They move again every few years. With only four local troops, there isn’t enough rotation among the males, making the genetic pool small.

As monkeys are an invasive species, Florida puts tight restrictions on how Williams’ group can help them. Trapped monkeys can’t be released — they must be euthanized or placed into captivity.

As Williams doesn’t believe monkeys should be pets, she doesn’t seek veterinary care for seriously injured and ill monkeys, hoping nature will heal them. But her group is building an enclosure for vervets captured for treatment or because they wandered too far.

Ultimately, Williams wants Florida to allow the release of captured vervets. Unlike Burmese pythons, iguanas and other invasive species, she argues, the colony doesn’t harm the environment.

“The monkeys’ lives matter regardless if they are nonnative or native,” she said. “All options should be exhausted to avoid euthanasia.” Her models show that without change, the colony will die off within 50 years.

The Florida Fish and Wildlife Conservation Commission responded that while the colony can remain, no exception allowing the monkeys’ release after capture can be made because their effects on the ecosystem are “not well understood.”

“There is also an inherent risk of injury when handling wildlife. Monkeys can act defensively and may bite or scratch. Mammals, including vervet monkeys, may harbor diseases transmissible to humans including rabies,” the statement said.

As darkness neared, the troop moved from the mangroves into the airport parking lot. It’s dinner time and there are seeds to pluck and workers’ treats to get. Some played while others groomed each other. Spike and Mikey again tussled before Williams’ admonition separated them. The aging king and his would-be heir then sat feet apart, eyeing each other warily.

Soon sated, the monkeys climbed back into their trees to spend another night in their unexpected realm, paying no heed to the loud metallic birds flying above.