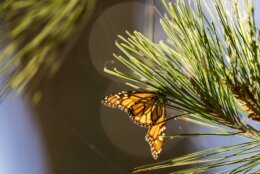 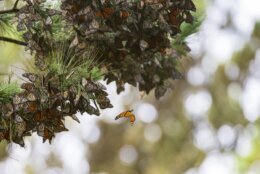 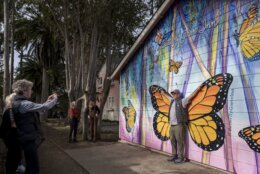 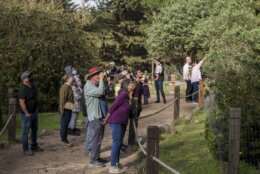 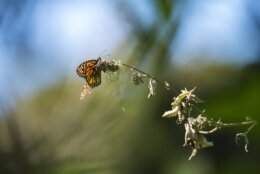 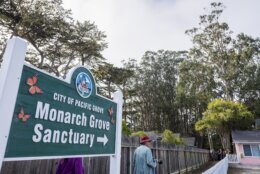 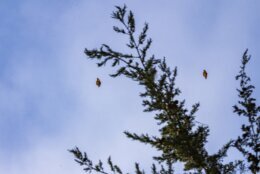 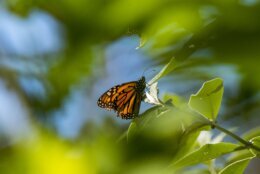 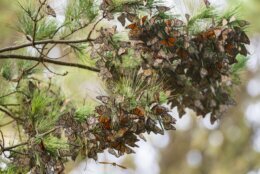 PACIFIC GROVE, Calif. (AP) — There is a ray of hope for the vanishing orange-and-black Western monarch butterflies.

The number wintering along California’s central coast is bouncing back after the population, whose presence is often a good indicator of ecosystem health, reached an all-time low last year. Experts pin their decline on climate change, habitat destruction and lack of food due to drought.

An annual winter count last year by the Xerces Society recorded fewer than 2,000 butterflies, a massive decline from the tens of thousands tallied in recent years and the millions that clustered in trees from Northern California’s Mendocino County to Baja California, Mexico, in the south in the 1980s. Now, their roosting sites are concentrated mostly on California’s central coast.

This year’s official count started Saturday and will last three weeks but already an unofficial count by researchers and volunteers shows there are over 50,000 monarchs at overwintering sites, said Sarina Jepsen, director of Endangered Species at Xerces Society for Invertebrate Conservation.

“This is certainly not a recovery but we’re really optimistic and just really glad that there are monarchs here and that gives us a bit of time to work toward recovery of the Western monarch migration,” Jepsen said.

Western monarch butterflies head south from the Pacific Northwest to California each winter, returning to the same places and even the same trees, where they cluster. The monarchs generally arrive in California at the beginning of November and spread across the country once warmer weather arrives in March.

The Western monarch butterfly population has declined by more than 99% since the 1980s.

Whether the population of monarchs that fly to Mexico from the eastern side of the country has rebounded is not yet known. Results of an annual county by experts with the World Wildlife Fund in Mexico won’t be released until next year.

Monarchs from across the West migrate annually to about 100 wintering sites dotting central California’s Pacific coast. One of the best-known wintering places is the Monarch Grove Sanctuary, a city-owned site in the coastal city of Pacific Grove, where last year no monarch butterflies showed up.

The city 70 miles (112 kilometers) south of San Francisco has worked for years to help the declining population of monarch. Known as “Butterfly Town, USA,” the city celebrates the orange-and-black butterfly with windowpane patterns in its wings with a parade every October. Messing with a monarch is a crime that carries a $1,000 fine.

“I don’t recall having such a bad year before and I thought they were done. They were gone. They’re not going to ever come back and sure enough, this year, boom, they landed,” said Moe Ammar, president of Pacific Grove Chamber of Commerce.

This year a preliminary count showed more than 13,000 monarchs have arrived at the site in Monterey County, clustering together on pine, cypress and eucalyptus trees and sparking hope among the grove’s volunteers and visitors that the struggling insects can bounce back.

Scientists don’t know why the population increased this year but Jepsen said it is likely a combination of factors, including better conditions on their breeding grounds.

“Climatic factors could have influenced the population. We could have gotten an influx of monarchs from the eastern U.S., which occasionally can happen, but it’s not known for sure why the population is what it is this year,” Jepsen said.

Scientists say the monarch population had sharply dropped because of the destruction of their milkweed habitat along their migratory route as housing expands into their territory and use of pesticides and herbicides increases.

Along with farming, climate change is one of the main drivers of the monarch’s threatened extinction, disrupting an annual 3,000-mile (4,828-kilometer) migration synced to springtime and the blossoming of wildflowers.

“California has been in a drought for several years now, and they need nectar sources in order to be able to fill their bellies and be active and survive,” said Stephanie Turcotte Edenholm, a Pacific Grove Natural History Museum docent who offers guided tours of the sanctuary. “If we don’t have nectar sources and we don’t have the water that’s providing that, then that is an issue.”

Monarch butterflies lack state and federal legal protection to keep their habitat from being destroyed or degraded. Last year, they were denied federal protection but the insects are now among the candidates for listing under the federal Endangered Species Act.