The Umatilla County Sheriff’s Office said the chimpanzee, who had lived with Tamara Brogoitti for 17 years in Pendleton, started attacking Brogoitti’s daughter at about 8 a.m. on Sunday, The Tri-City Herald reported.

Brogoitti, 68, called 911 and said the animal had bitten her 50-year-old daughter in the torso, arms and legs and that her daughter was hiding in a basement bedroom, sheriff’s Lt. Sterrin Ward said.

When deputies arrived, the ape was roaming a fenced area outside the house, he said. The sheriff’s office said the animal needed to be ‘put down’ so they could get medical aid to the daughter and that they had Brogoitti’s permission to shoot it.

The chimpanzee was shot once in the head, Ward said. Both women were taken to a hospital for treatment.

The group People for the Ethical Treatment of Animals said in a statement it had warned state authorities that Brogoitti had created a ticking time bomb by engaging in direct contact with a dangerous ape.

It’s not clear what caused the chimpanzee to attack.

From 2010 to early 2019, Brogoitti operated the Buck Brogoitti Animal Rescue at her ranch, the East Oregonian reported. The nonprofit primarily housed and cared for horses the sheriff’s office seized in abuse and neglect cases.

It wasn’t immediately known how the chimp came to live with her. 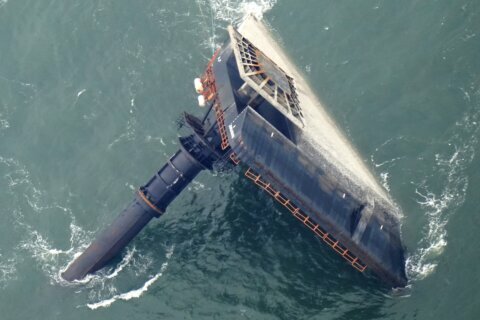