But state biologists say that while 14 hatchlings pecked their way out of eggs this year in Louisiana, only four of them are still alive. They include both youngsters from eggs laid by the female identified as L7-11.

“She was the very first female to ever lay an egg in this population. Unfortunately, she and her first mate were infertile,“ Sara Zimorski, the Louisiana Department of Wildlife and Fisheries biologist who leads the whooping crane project, said in a news release Wednesday.

The state’s previous record for nesting pairs was 13 in 2019. “This increase in nesting is a sign of breeding progress in the project, which seeks to return the whooping crane to Louisiana,” the news release said.

“Finally, this year, in her eighth year of nesting, she and her mate were able to produce two chicks that have survived,’’ Zimorski said.

The fluffy brown hatchlings grow into mottled brown-and-white juveniles. As adults, they’ll be about 5 feet (1.5 meters) tall and white with red caps and black mustaches and wingtips. Their wingspan can reach 7 feet (2.1 meters) across.

The flock currently numbers 70, the department said. About 10 juveniles less than 1 year old are usually brought to join it every year, but none were added last fall because the coronavirus pandemic pretty much halted captive breeding in 2020.

The birds typically mature at 3 to 5 years of age, and about one-third of those in Louisiana’s flock are at most 3 years old, the department said.

There are only about 800 whooping cranes in the world, according to the International Crane Foundation. All are descended from about 15 that survived hunters and habitat loss in a flock that migrates between Texas and Alberta, Canada.

About 500 birds are now in that flock, the only one that is self-sustaining. There are about 140 captive whooping cranes and 80 in a flock taught to migrate between Wisconsin and Florida with ultralight aircraft.

When five chicks hatched in the wild in 2018, it was celebrated as a milestone. Seven eggs laid in the wild hatched the following year, some in the wild and some in captivity.

Zimorski said Louisiana’s recent breeding season “started off well but we had a rough second half.’’

Chicks died both because of floods and breeding problems, she said.

“With so many new pairs it’s not unusual that they wouldn’t be successful on their first attempt,” she said. “We’re still seeing progress as the birds gain experience and we are pleased with the four surviving chicks.’’ 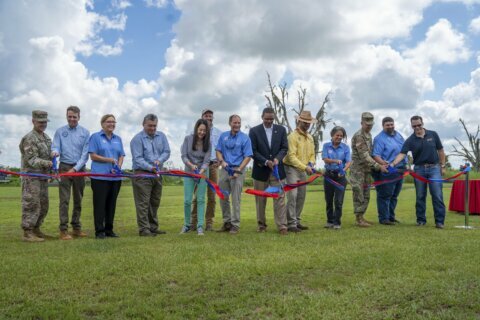