The Senate Resources and Environment Committee voted 6-2 with no Democratic support to approve the agriculture industry-backed bill that includes substantial other changes intended to cut the wolf population from about 1,500 to 150.

Backers said there are too many wolves in Idaho and they’re attacking cattle, sheep and wildlife, costing agriculture producers hundreds of thousands of dollars and reducing the number of deer and elk available for hunters.

Opponents said the legislation threatens a 2002 wolf management plan involving the federal government that could ultimately lead to the U.S. Fish and Wildlife Service taking back control of managing the state’s wolves.

About 500 wolves have been killed in the state in each of the last two years by hunters, trappers and wolf control measures carried out by state and federal authorities.

“For the cattle industry, our priority really revolves around opening up the Wolf Depredation Control Board to contract with private individuals and enabling the free-market system to take place and create more efficiencies in actually controlling those wolf populations,” Wyatt Prescott of the Idaho Cattle Association told lawmakers.

Other changes in the legislation include removing any limit on the number of wolf tags issued to a hunter, meaning there would be no restriction on how many wolves one person is allowed to kill. Wolves, though, have proved difficult to find and kill for the vast majority of hunters and trappers.

The legislation also combines a hunting tag with a trapping and snaring tag, meaning only one tag is needed for those combined methods. Wolf trapping would be allowed year-round on private land.

In addition, the legislation makes changes to allow hunting wolves with ATVs and snowmobiles, methods allowed for animals classified as predators, such as coyotes. Also, state agencies outside of Idaho would be allowed to kill wolves in Idaho.

“Could you tell me if there’s anything that’s not allowed as far as the take of wolves?” Democratic Senate Minority Leader Michelle Stennett asked the bill’s sponsor, Republican Sen. Van Burtenshaw, after he finished listing the proposed changes to state law in the bill.

“There’s nobody in this group that wants to wipe out the wolves completely,” Burtenshaw said. “We want to manage the wolves, we want them to be not wiped out, that’s not our plan here, but to be managed to a level that we can deal with the issues that are ahead of us, and that is depredation.”

Specifically, Burtenshaw cited Idaho’s 2002 wolf conservation and management plan. The plan calls for at least 150 wolves and 15 packs. He said the state is allowed to increase the killing of wolves to reach that level. If the wolf population falls below 150, the killing of wolves would have to be reduced.

If Idaho’s wolf population fell to 100, there’s a possibility the U.S. Fish and Wildlife Service could resume management of its wolf population. The 2002 document says wolf management could revert to what was in place when wolves were listed under the Endangered Species Act.

Jonathan Oppenheimer of the Idaho Conservation League testified that the Legislature was treading on territory that’s the responsibility of the Idaho Fish and Game Commission to set wildlife policy.

“That’s a significant concern for our members, and I think for many Idahoans,” he said. “Ultimately we see this as potentially inviting the U.S. Fish and Wildlife Service to return in a management capacity within the state of Idaho.” 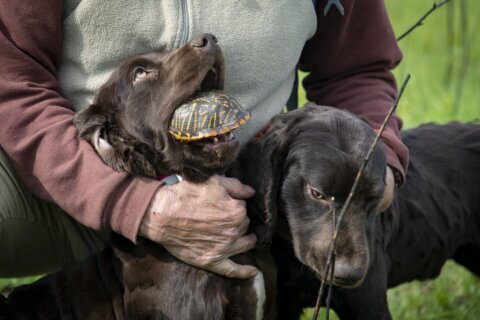