How Cher is helping save the world’s loneliest elephant

Islamabad — Pop music icon Cher was in Pakistan over the weekend to join a lonely elephant on his long-awaited journey to salvation. Kaavan, dubbed the world’s loneliest elephant, finally escaped the meager confines of a zoo in Islamabad and was well on his way to a wildlife sanctuary in Cambodia on Monday.

The American singer and actress campaigned for years to get Kaavan out of the Marghazar Zoo. Along with U.S. businessman Eric Margolis and the group Four Paws International, she helped pay for his relocation through her charity, Free the Wild. Local Pakistani activists first put Kaavan’s plight on Cher’s radar with a Twitter campaign, aiming messages with the hashtag #SaveKaavan and #FreeKaavan at celebrities worldwide. 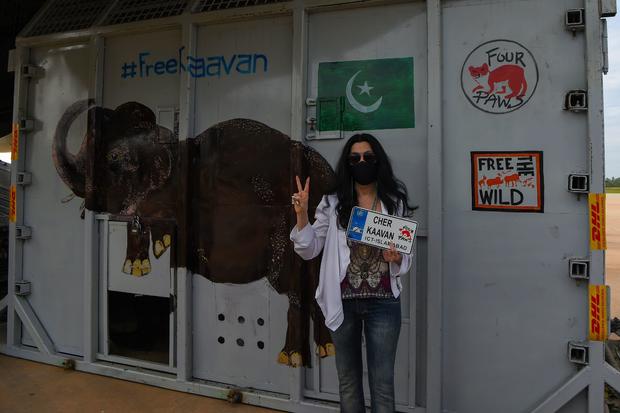 U.S. singer Cher poses in front of the crate containing Kaavan the Asian elephant upon his arrival in Cambodia from Pakistan, at Siem Reap International Airport, November 30, 2020.

At just about a year old, Kaavan was gifted to Pakistan by Sri Lanka in the mid-1980s. He spent decades at the Islamabad zoo in a small enclosure with few of the amenities required for the physical or mental health of an animal of such high intelligence. He performed for visitors, reportedly prodded by handlers to collect cash.

In 2012, Kaavan lost his only companion, a female elephant called Saheli, and his demeanor rapidly deteriorated. He became angry, despondent, and given his unhealthy diet, obese.

The conditions were so dire at the zoo that a Pakistani court ordered it to be shut down in May this year, and all the animals to be relocated. That sparked a global effort to evacuate the animals, and especially Kaavan. 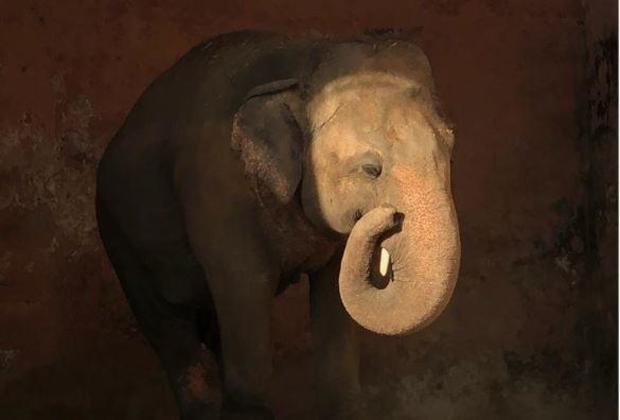 Kaavan the elephant is seen in his enclosure at the Marghazar Zoo in Islamabad, Pakistan on November 28, 2020, where he spent more than 30 years before being transferred to an animal sanctuary in Cambodia.

When news of Kaavan’s grim circumstances reached Cher on Twitter, she reached out to Mark Cowne, a global talent agency boss with a passion for wildlife whom she had met years earlier.

“She had met Mark, who had previously moved 300 elephants, and said, ‘Listen, we gotta do something,’ so he started coming over here and finding out what’s happening, and they decided to form Free the Wild, hoping that we can get big animals, at least starting with big animals, out of zoos,” Cher’s assistant Jennifer Ruiz told CBS News in Islamabad.

The superstar had originally focused her efforts on trying to get an elephant out of the Los Angeles Zoo, Ruiz said, but they’ve had no success so far in California. “So this came up and, you know, she always tells me, ‘you do your best with what falls in your lap.’ If someone asks you, you try to do your best.”

Teaming up with Free the Wild, a team of vets and experts from the U.K.-based international animal welfare group Four Paws has spent months on-site, working with Kaavan to prepare him for his big move.

Four Paws’ head of communications Hannah Baker told CBS News that Kaavan’s journey is the biggest elephant transfer the charity has ever undertaken, and their first by plane. Elephants have been moved by plane from one state to another in the U.S., for instance, but never an animal as large, or a move as logistically complicated, as this.

Pulling it all off during a global pandemic has posed some unique challenges, but fortunately Kaavan’s pre-flight COVID-19 test came back negative, and arrangements for a 30-day quarantine in Cambodia were in place.

Kaavan’s new home is the vast Kulen Promtep Wildlife Sanctuary in Cambodia.  While he’ll be confined to just three acres for his quarantine period, even that will be a significant upgrade as his enclosure at the Islamabad zoo was just a half-acre, and largely devoid of natural materials. 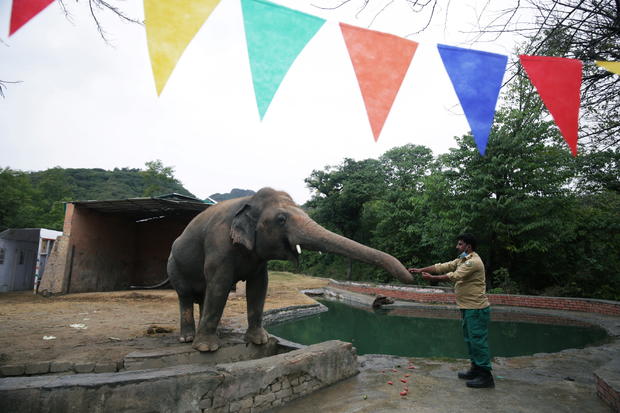 A caretaker feeds Kaavan the elephant as he awaits his flight to a sanctuary in Cambodia, during a farewell ceremony at the Marghazar Zoo in Islamabad, Pakistan November 23, 2020.

Once he completes his quarantine, the plan is to introduce him to three female elephants, and he’ll have 25,000 acres to roam.

Rehab with a new friend

Egyptian veterinarian Dr. Amir Khalil, Four Paws International Director of Project Development, is known for rescuing animals from areas stricken by war or disasters. He’s become Kaavan’s best friend, forming a close bond with him over the last few months as the elephant was brought back to health for his trip.

“When I first met Kaavan he was severely overweight, had issues with his nails and was displaying what is known as stereotype behavior: Animals in captivity need to move, but if chained they resort to moving their head from side to side in order to release endorphins and all their pent up energy.”

Khalil told CBS News that this sad behavior, which Kaavan would engage in for up to 15 hours a day, was mistaken by his previous handlers in Pakistan as dancing.

“My initial plan was just to examine Kaavan and work on making him fit for travel, but for some reason he seemed to like my voice,” said Khalil, who spent hours standing by a tree at the back of Kaavan’s enclosure just trying to get the animal to accept him. He would sing Frank Sinatra songs as he stood there and, before long, he realized that Kaavan seemed to be a fan of his rendition of “I did it my way,” and other classics.

The elephant started to trust the vet, and Khalil would often find Kaavan waiting for him.

“All relationships, whether between humans or humans and animals, must be based on trust,” he said. 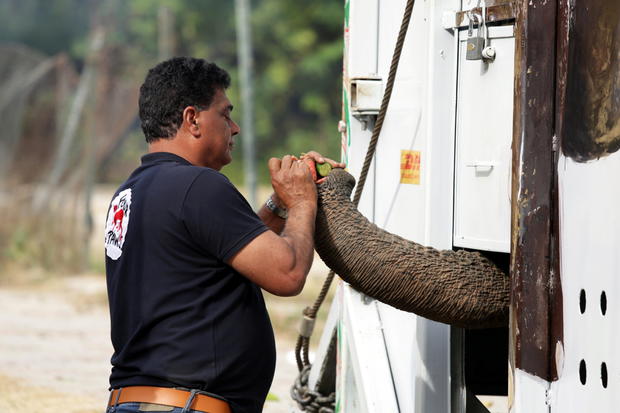 Dr. Amir Khalil, head of project development at Four Paws International, stands outside a crate and feeds Kaavan the elephant before the animal is transported to a sanctuary in Cambodia, at the Marghazar Zoo in Islamabad, Pakistan, November 29, 2020.

Kaavan’s diet plan was also crucial if he was going to squeeze into his travel cage. He had been gorging on about 440 pounds per day of sugar cane, but Khalil knocked that on the head quickly. On a more pachyderm-friendly diet of fresh fruit and veggies, Kaavan dropped from 5.5 tons down to a healthy 4.8. The chains that had often bound his legs for more than two decades were removed, forced performances were dropped and his daily routine was made more natural. The changes made him a much calmer and happier elephant before his journey.

For the last four weeks Kaavan underwent routine crate training to get him used to his custom-made travel cage – which he fit into comfortably given his lean new physique.

Kaavan was celebrated at the Islamabad zoo over the last couple weeks. There was a party and well-wishers were able to come and see him for the last time, bidding farewell to the animal who had for three decades been the main attraction. A slew of government officials stopped by to say goodbye, including President Arif Alvi who paid a visit over the weekend. 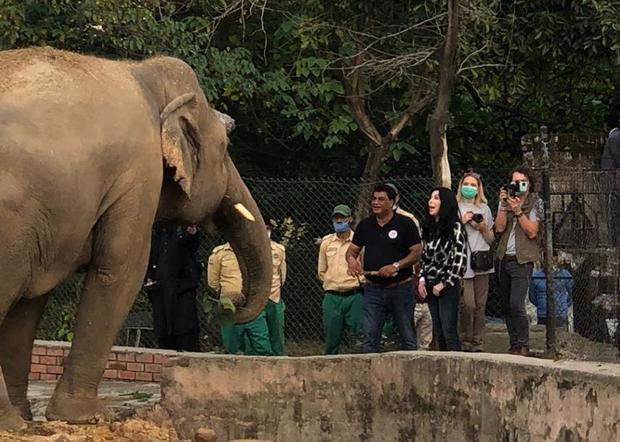 Singer Cher (third from right) meets Kaavan the elephant at a zoo in Islamabad, Pakistan, along with veterinarian Dr. Amir Khalil, International Director of Project Development for the Four Paws International charity, on November 28, 2020.

On Saturday, Cher finally got to meet her elephant friend for the first time, taking the opportunity to serenade the music-lover and offer him a bite to eat.

On Monday, the Russian cargo plane hired for the trip touched down in Cambodia, and the next chapter of Kaavan’s life began.

Khalil said he hoped the elephant’s story would serve as “a symbol for humanity, and doing what is right for the animals.”