PORTLAND, Maine (AP) — Nick Muto has fished up and down the New England coast and there is nothing that…
Listen now to WTOP News WTOP.com | Alexa | Google Home | WTOP App | 103.5 FM

PORTLAND, Maine (AP) — Nick Muto has fished up and down the New England coast and there is nothing that gets his blood boiling more than the sight of a seal.

Muto, whose two boats fish for groundfish such as skate and monkfish as well as lobster, is among a growing group of anglers, beach goers and local officials who are quick to blame everything from disease to depleted fisheries to increased shark sightings on the exploding seal population.

“Areas that we used to traditionally fish that were as close to guarantees as you could get have been strip mined of fish, and the fish have been driven out of there by seals,” Muto said. “They have eaten fish out of our nets. They have been caught in our nets. They are everywhere.”

The debate over seals was reignited after the death in July of a swimmer killed by a great white off Harpswell, Maine. Seals are often shark prey, and experts believe Julie Dimperio Holowach may have been mistaken for a seal.

No one questions that seal and shark numbers are on the rise, mostly due to federal protections. It’s estimated there are as many as 50,000 grey seals in New England waters plus a lesser number of harbor seals. The animals were almost eliminated through hunting and bounties decades ago.

But experts maintain there is not enough science to determine whether the current population is too big and little basis for culling the marine mammals. Even suggesting seals are destroying fisheries or are solely to blame for shark attacks is not supported by hard evidence. Experts say warming waters and other factors also could be playing a role. The Gulf of Maine, which stretches from Cape Cod to Nova Scotia, has been heating up faster than 99% of the world’s oceans.

“We get into this question of how many grey seals there are. The next question is how many seals should there be, which is kind of where people are going to go next with that, which is a very challenging thing,” said David Johnston, a marine ecologist at Duke University who has done grey seal population estimates using Google Earth and tagged seals to demonstrate how their feeding behavior changes due to sharks in the Northwest Atlantic.

Seal population rise has prompted the National Oceanic and Atmospheric Administration to propose guidelines for deterring marine mammals, including physical barriers to keep seals away from fishing gear.

“Frustration by fishermen and property owners stemming from conflicts with marine mammals has increased,” notes NOAA’s proposal. The agency is taking comments until Oct. 30.

But Johnston and Stephanie Wood, a University of Massachusetts Boston seal biologist currently surveying seals in the Boston Harbor, said the public should view seals as a conservation success story, rather than a problem to be managed.

Hunted almost into extinction by the 1900s, seals were given federal protection in 1972 by the Marine Mammal Protection Act. Seals began returning to New England waters in the 1980s and 1990s from Nova Scotia and have thrived ever since — often raising pups on federally protected islands once home to hunting and fishing camps. They also disperse widely and have benefited from a wide-ranging diet, including fish, crustaceans and squid.

“Habitat opened up for seals, which is sort of the opposite story that we hear about a lot of other populations struggling to recover,” said Wood, noting that other marine mammals such as whales and monk seals “haven’t recovered in the same way.”

Trying to reduce the numbers of seals is more complicated than opening up a hunt for an abundant species such as deer, said Kristina Cammen, a marine mammal scientist with University of Maine. Bounties on seals in the 20th century reduced their populations by as many as 135,000, and marine mammal protections are designed to prevent that kind of population loss again, Cammen said.

Learning to coexist with the growing seal population makes far more sense, even if it contributes to more shark sightings in coastal waters, she said. “A healthy ecosystem has sharks, seals and humans and they all have a place in that ecosystem.”

Some species of sharks have rebounded because there are protections for them, not just because there are more seals to eat, said Andrea Bogomolni, chair of Northwest Atlantic Seal Research Consortium, based in Woods Hole, Massachusetts.

But seal critics call seals a public safety and ecological crisis and warn there will be more shark attacks if nothing is done. Tourism, too, will suffer, they said.

Some who are alarmed by the seal population burst are advocating culls while others are proposing some form of birth control. One group wants to amend the Marine Mammal Protection Act to allow delisting of species covered— similar to what’s allowed under the Endangered Species Act. The first step, they argue, would be a study to determine what’s a healthy population of seals for the region.

“The quality of life here and our ability to make a living and our economy will go down the toilet,” he said. “I have respect for wildlife and respect for those that believe seals and sharks need to come back. But we have a right to survive and exist as well.”

The shark attack in Maine that killed Holowach in July took place about 30 to 40 feet (9 to 12 meters) off the shore of Bailey Island. Kayakers took Holowach to shore, but not in time to save her.

Despite the attack, few people are blaming the seals. Longtime Maine whale watch guide Zack Klyver said the growth of seals has contributed to ecotourism.

“I’d prefer that we adapt and we not demand that everything adapt to us,” Klyver said. “And there’s a lot of interest in seals, in seeing them.” 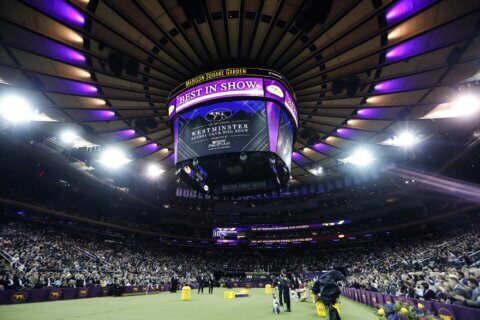