THANKSGIVING NEWS: Thanksgiving dinner for pets? | What to do with leftovers | 100 recipes | Grocery stores open on Thanksgiving | WTOP Weather
Home » Animals & Pets » A hijab and Azawakh…

NEW YORK (AP) — Dressed in hot pink and a colorful hijab, crouched down close to Ring 1 to cheer on the hounds, Aliya Taylor clearly stood out.

It’s true, no one else at the Westminster Kennel Club breed judging Sunday came in similar attire. But the longtime handler is used to that — there just aren’t many other Muslims in the dog show world.

“I’ve never seen a hijab in the ring,” she said. “A lot of people think it’s a costume I wear in the ring to show off my dogs. But this is how I normally dress.”

“My head is pretty much always covered. This is how you’d see me on a Monday or Tuesday going to the store,” she said.

On this afternoon, the retired Philadelphia police officer and former prison guard wasn’t presenting any of her own dogs. Instead, she was in town to cheer on a dear friend who was showing an Azawakh — loosely called an African greyhound, they were making their debut in America’s top pooch pageant.

Taylor was in the spirit, complete with earrings shaped like the continent of Africa that featured an image of a festive village woman.

New faces at Westminster, on and off the purple carpet.

“Our sport welcomes people from all walks of life,” said Gail Miller Bisher, the television host of the competition on Fox Sports 1. “That’s our common bond, dogs.”

In fact, Taylor was recently invited to a Westminster event in New York to introduce the unusual-looking Azawakh. With Fashion Week coming to the city, she was certainly stylish in a yellow hijab and bejeweled green print dress.

Best in show for the 2,630 dogs in 204 breeds will be chosen Tuesday night at Madison Square Garden.

Next year, Taylor intends to have her Azawakh named Bahir in the running. At 15 months old, he needs a couple more good showings to qualify.

The 47-year-old Taylor drew a lot of attention on Thanksgiving Day when over 25 million viewers saw her in the ring wearing a white hijab and long blue dress during the National Dog Show.

Her headscarf conforms to the Islamic standard of modesty. But she realizes not everyone of her faith shares her beliefs.

“There are some Muslims who believe dogs are unclean,” she said. Taylor said she has received some criticism for her participation from “a few Muslims, a few hard-line Muslims.”

“I do not believe that. Dogs have been our companions for so long,” she said. “Keeping dogs as pets is a recent phenomenon. It’s a Western phenomenon.”

Overall, “people have been pretty much welcoming,” she said. “At the National Dog Show, many Muslims came to my setup backstage to thank me.”

Taylor’s path began at 12 years old when she got a miniature schnauzer and began practicing her presentation. She has handled standard poodles, borzois and other breeds in the past, and now owns six Azawakhs.

The West African hounds — the only breed recognized by the American Kennel Club that is taller than it is longer — is rare in the United States. They’re sleek and slender, exceptionally so.

As the official breed standard reads, “in correct weight, a minimum of three to five ribs and hip bones should be visible.”

“I’ve had people call animal control on me. I’ve become friends with animal control in Philadelphia,” she said. “They know me. They’re like, ‘You’re fine.'”

Taylor watched this time as her pal Vicki Williams, from Sweetwater, Tennessee, guided Nuri the Azawakh to an award of merit.

“We’re all family,” Williams said. As for seeing someone from a different culture in this setting, “It’s beautiful. It’s wonderful.”

Echoed Williams’ friend Cindi Palmieri: “We knew Aliya before she was famous.”

Taylor hopes to take the next step next year.

“I will definitely be there in the ring,” she said. “That would just be a culmination of my dreams to walk into that ring. All I could say would be Mash’Allah.” 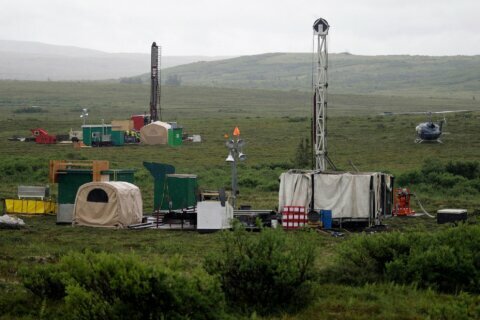