SAVANNAH, Ga. (AP) — An endangered newborn right whale spotted with grievous injuries to its head off the Georgia coast is unlikely to survive, though scientists may try to inject the calf with antibiotics using a syringe fired from an air gun if they can safely get close enough, government experts said Monday.

Foggy weather along the coast was delaying efforts to locate the wounded baby whale and its mother by plane Monday. The calf was first seen from the air Wednesday, and a boat crew got close enough Friday near St. Simons Island for scientists to conclude its injuries were worse than initially feared.

“If you talk about an animal having an uphill climb, this one has a climb up Mt. Everest,” said Barb Zoodsma, who oversees the right whale recovery program in the U.S. Southeast for the National Marine Fisheries Service.

Scientists estimate 400 or fewer North Atlantic right whales still exist. The wounded calf was spotted by one of the aerial survey crews that fly off the coasts of Georgia and Florida during the winter months to search for newborn whales swimming with their mothers.

Photos take by plane and boat revealed deep cuts on both sides of the baby whale’s mouth, as well as a gash atop its head near the blowhole, said Dr. Teri Rowles, a veterinarian for the fisheries service.

She said the wounds, likely caused by the propeller of a boat, indicate the calf probably lost a large amount of blood. And the mouth injuries could permanently impair its ability to feed.

“After review by a lot of experts, both biologists and clinical veterinarians, we downgraded the prognosis to poor,” Rowles said. “In other terms, we would say it’s likely not to survive.”

Humans are limited in what they can do to help. A specially trained boat crew was standing by Monday to approach the calf and its mother again, if they could be spotted from the air.

If a boat can get close enough without distressing the calf or its mother, Rowles said, scientists have an air gun set up to fire a syringe specially prepared with a needle and antibiotic dosage appropriate for a baby right whale.

But they might decide it’s not worth the risk if the calf’s health appears to be rapidly deteriorating, or if scientists worry the mother whale could get injured.

“She’s a known reproductive female that has contributed to the population,” Rowles said. “We don’t want to do anything to endanger her.”

The injured calf is the fourth that’s been spotted off the Southeast U.S. coast since mid-December.

This version has been corrected to fix the spelling of species. 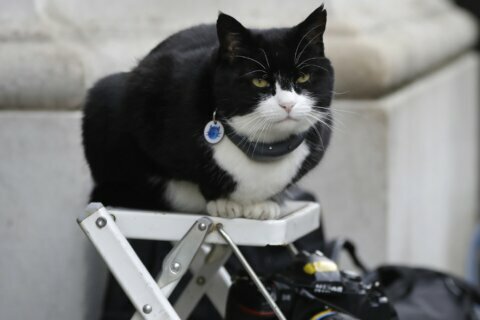 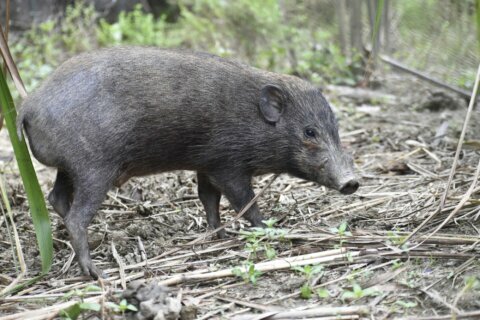