Eleven young endangered whooping cranes are in southwest Louisiana, being prepared to join 69 adults in the wild.

The juveniles will spend about two weeks in a net-covered pen at the White Lake Wetlands Conservation Area near Gueydan.

Whooping cranes are among the world’s largest and rarest birds. The 850 or so alive today all descended from 15 that lived in coastal Texas in the 1940s.

The 11 brought to White Lake on Tuesday are still mottled brown and white. As adults, they’ll be about 5 feet (1.5 meters) tall, white with black wingtips and have nearly featherless red caps.

Louisiana Department of Wildlife and Fisheries biologist Sara Zimorski said Thursday that the new arrivals will be counted as part of the flock once they’re released to a bigger uncovered pen, about Nov. 25.

The cranes can fly out, but most predators big enough to endanger them cannot get in.

“They often land completely outside the pen when they first fly and sometimes it takes them several days to figure out they can fly in and out of the open release pen,” Zimorski wrote in a text message.

The department will provide supplemental food in the pen into January, she said.

Four young birds were raised at the Audubon Species Survival Center in New Orleans, and the others at the International Crane Foundation in Baraboo, Wisconsin. The two groups were brought together at Audubon in early October.

The birds were taken to White Lake on Tuesday.

State and federal biologists hope that, eventually, Louisiana’s flock and the one originally taught to migrate by following ultralight aircraft from Wisconsin to Florida will be self-sustaining.

At present, the only self-sustaining flock winters in Texas and breeds in Canada. It has about 500 birds. The newer migratory flock numbers about 100. 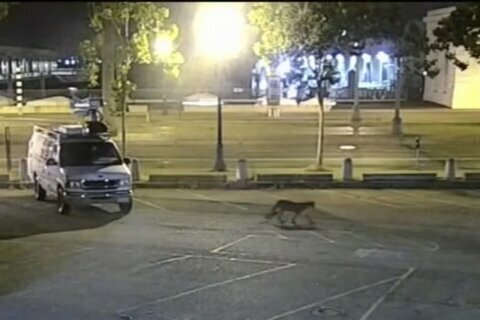