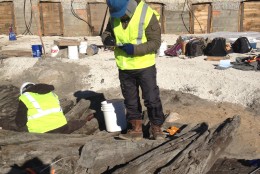 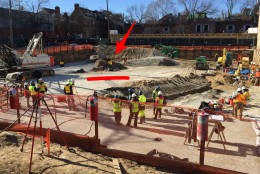 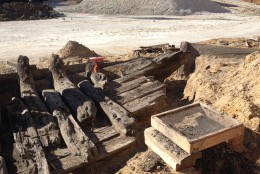 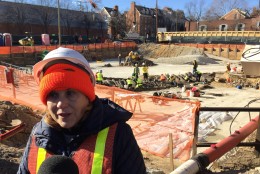 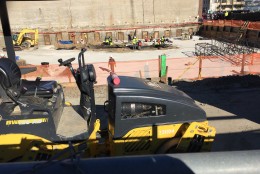 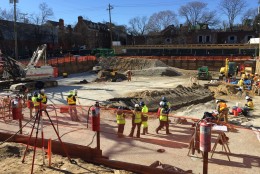 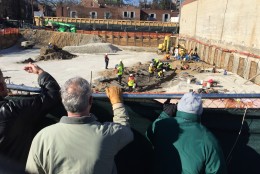 ALEXANDRIA, Va. — The public got a brief peek Tuesday of historic finds at an Alexandria construction site concealed behind fencing for months.

The construction pit for a hotel at South Union and Duke streets in Old Town has two artifacts remaining. A brown mound encasing a perhaps centuries-old privy and part of the hull of a 50-foot vessel.

The boat was discovered in December 2015 next to a previous find at 220 South Union Street of a public warehouse.

One of the city’s first Public Works projects, the warehouse was built in 1755 when George Washington was a young man and the city still a British colony.

Multiple layers of the privy are being excavated in the finest detail. Detecting and examining everything from seeds to fish bones may reveal the diet of Alexandria colonists.

It’s believed the vessel on the site was deliberately sunk as landfill in 1798. It looks like a bus-sized rib cage of roughhewn timbers.

“I was amazed to see how big the timbers were,” said Paddy Link of McLean, Virginia. “That was probably, what, an acre of forest?”

Dozens of people crowded around a small section of the fencing Tuesday where sheeting had been removed to reveal the site.

“It’s great,” said Rick Barrow, who is visiting from Blacksburg. “Virginia takes care of its history.”

City Archeologist for Alexandria Francine Bromberg said a land deed from 1798 suggests the boat was used as landfill.

“If you owned property near the river at the time, you could fill the land and then you’re creating more property for yourself,” Bromberg explained.

How the 50-foot vessel was used is a mystery. Bromberg believed it may have been a “coastal ship” that traveled up and down the East Coast.

“We don’t know whether it was used in trade, we don’t know if it was a military ship, there’s all sorts of questions we have that are going to require additional research,” she says.

Conserving the pieces for possible display may take years, which is fine by Barrow, who said it’s important to preserve history.

“Especially for new construction, we need to respect what’s been there before,” he says.

Bromberg said the owners of what will be Hotel Indigo have expressed interest in receiving artifacts to create an interpretive display of the site’s past to perhaps put in the hotel lobby.