FREETOWN, Sierra Leone (AP) — Anti-government protesters in Sierra Leone clashed with police in the streets of the capital on Wednesday, as tensions over the rising cost of living turned deadly in the West African nation.

In a national broadcast, Vice President Mohamed Juldeh Jalloh confirmed fatalities without giving further details. He announced a nationwide curfew from 3 p.m. local time in a bid to stem the violence.

“These unscrupulous individuals have embarked on a violent and an unauthorized protest, which has led to the loss of lives of innocent Sierra Leoneans including security personnel,” Jalloh said, adding that some public buildings including police stations had been attacked and burned down.

The protesters on Wednesday were calling for the departure of President Julius Maada Bio, who was elected in 2018 and still has 10 months left in his term. The demonstrators chanted “Bio must go” as they made their way through the capital, Freetown.

The cost of living in Sierra Leone has risen by more than 40% within the last few months: A bag of rice that used to cost 350 leones now costs more than 500, consumers say. Meanwhile, electricity and fuel prices also have spiked.

The government has criticized the unidentified organizers of the protest, warning that the country already has suffered enough through more than a decade of civil war that ended in 2002.

“Sierra Leone has gone through a lot so let us change the trajectory and not allow people to divide us,” Abdul Karim Will, spokesman for the Office of National Security, told the national radio broadcaster earlier in the day. 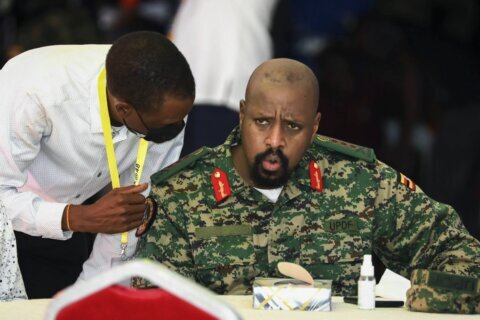 Liberia arrests 2 after $100 million of cocaine is seized