ABUJA, Nigeria (AP) — Africa must be part of a united global fight against monkeypox, the World Health Organization’s Africa office said Thursday, as countries in Europe, the U.S. and elsewhere respond to unusual outbreaks of the disease.

“We must have one connected global response to monkeypox to avoid it becoming endemic in more countries,” Dr. Matshidiso Moeti, WHO Africa director, said in an online briefing.

As countries in the developed world find ways to limit the spread of monkeypox, “it is very important that … we make sure that we share those tools, we build capacities all over the world to respond to these outbreaks,” she said.

“What is extremely important now is to avert any potential for a repeat of the inequitable access to COVID-19 vaccines experienced by African countries early in the pandemic,” Moeti said.

Monkeypox is ordinarily found in countries in West and Central Africa with tropical rainforests but recently the disease has been discovered in more than 20 countries including Britain, Spain, Portugal, Italy, Switzerland, the United States, Israel and Australia. More than 500 cases have been reported, many apparently tied to sexual activity at two recent raves in Europe. No deaths have been reported.

So far, sequencing has not yet shown any direct link to the outbreak outside Africa, health officials say.

Meanwhile, seven of Africa’s 54 countries have reported the disease and there have been about three times as many monkeypox cases as usual.

There have been more than 1,400 suspected monkeypox cases and 63 deaths in African countries where the disease is endemic — Cameroon, Central African Republic, Congo and Nigeria — according to the Africa Centers for Disease Control and Prevention.

But only 44 of those suspected cases have been confirmed, said Dr. Fiona Braka, who leads emergency operations at WHO Africa’s office in Brazzaville, Republic of Congo.

Part of the reason for the wide gap between suspected and confirmed cases is the limited testing capacity in African countries, said Braka. Just 10 countries in Africa are able to test for the disease, she said.

Monkeypox is in the same family of viruses as smallpox, and smallpox vaccines are estimated to be about 85% effective against monkeypox, according to WHO.

The countries in the developed world have started using smallpox vaccines and are considering the use of antivirals to battle their outbreaks of the disease. Doctors in Africa say those resources should also be available to help them.

One of the worst-hit countries in the continent is Congo which has had 465 suspected cases and nine deaths from the disease this year, health authorities said this week.

Nigeria, one of the four African countries where monkeypox is endemic, has seen sporadic cases every year since 2017. It has confirmed 21 monkeypox cases so far this year, according to Dr. Ifedayo Adetifa, head of the country’s Center for Disease Control. Nigerian health authorities have scaled up a digital surveillance system which has helped in the early detection of cases, he said.

“It is important that we do all that we can to stop this,” said Adetifa. “We are in a globally connected world … We are not safe until everybody is safe.” 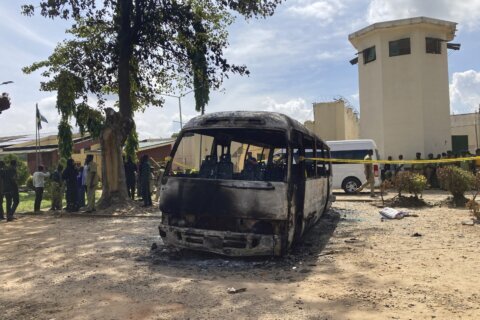