HARARE, Zimbabwe (AP) — The discovery of the dismembered body of an opposition activist who had been missing is stoking…
Listen now to WTOP News WTOP.com | Alexa | Google Home | WTOP App | 103.5 FM

HARARE, Zimbabwe (AP) — The discovery of the dismembered body of an opposition activist who had been missing is stoking tensions in Zimbabwe, a country with a history of politically motivated abductions and killings.

Moreblessing Ali, 46, was abducted outside a bar in Nyatsime, a neighborhood of Chitungwiza on the outskirts of Harare on May 24. Her body, cut into pieces, was found in a well in the area at the weekend, family lawyer Job Sikhala said.

Police said they are investigating the matter and dismissed allegations that the case is linked to politics.

But opposition supporters and other groups allege it is a political killing, pointing to the southern African nation’s troubled legacy of political violence.

“This is a very bad indication of the elections in 2023. The dark clouds of violence are gathering,” Nelson Chamisa, president of the Citizens Coalition For Change told dozens of mourners Tuesday.

Many of those who gathered to grieve Ali were clad in the opposition party’s yellow colors and carried sticks amid reports of clashes with ruling party supporters in the area.

Tensions are rising in Zimbabwe, as economic hardships worsen and potentially divisive elections set for next year. Zimbabwe has had a series of violent and disputed elections since independence from white minority rule in 1980.

The Southern African nation’s history of politically motivated abductions, enforced disappearances and killings is “fueled by the impunity of perpetrators,” Amnesty International said in a statement Tuesday, urging that authorities “must not leave any stone unturned” to ensure the arrests of the perpetrators of Ali’s killing.

Some victims of past abductions have been released after days or weeks, many after being tortured. Others, such as journalist and political activist Itai Dzamara who was abducted in 2015, have not been found. 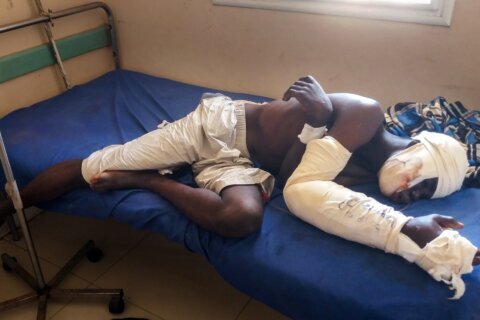