Somaliland market fire losses estimated at up to $2 billion

MOGADISHU, Somalia (AP) — A massive fire in an expansive market in the capital of Somaliland destroyed property worth up to $2 billion, according to local officials in the autonomous region of Somalia.

At least 28 people were wounded in the Friday night fire that ravaged Waheen market, a major source of livelihood for the residents of Hargeisa.

The loss on the eve of the holy month of Ramadan sparked despair among many at home and solidary efforts among outsiders who say they will help Somaliland in rebuilding the market.

A preliminary report released by a national taskforce looking into the fire estimates losses of between $1.5 billion and $2 billion.

The cause of the fire is yet to be determined, but some traders in Hargeisa said they believe a bad electrical connection may have been the cause.

The disaster has united Somalis, with President Mohamed Abdullahi Mohamed of Somalia reaching out to Somaliland leader Muse Bihi Abdi in a rare phone call between the two. Abdi, who has been Somaliland’s president since 2017, has been pursuing international recognition of his territory’s self-declared independence, which Somalia opposes.

“Saddened to see the aftermath of the fire in Hargeisa with such destruction in the open market that is the economic heart of the city, affecting many small and family enterprises,” British Prime Minister Boris Johnson said on Twitter. “Your city will rise again and the UK will do what we can to support Somaliland’s rebuilding effort.”

Some in Hargeisa who spoke to AP said the fire shattered their livelihood.

“It is a major hit on the first day of Ramadan, as so many of us rely on this market (to) make our ends meet,” said businesswoman Hodan Ali, who lost property in the inferno.

She described Waheen market as “a one-stop spot for the needs of” Somalilanders.

Strategically located by the Gulf of Aden, Somaliland’s territory of more than 3 million people broke away from Somalia in 1991 as the country collapsed into warlord-led conflict.

Despite lacking international recognition, Somaliland has maintained its own independent government, currency and security system. The region has largely succeeded in holding regular elections over the years, including parliamentary polls held last year. 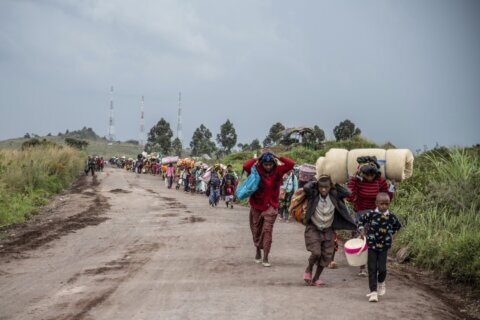